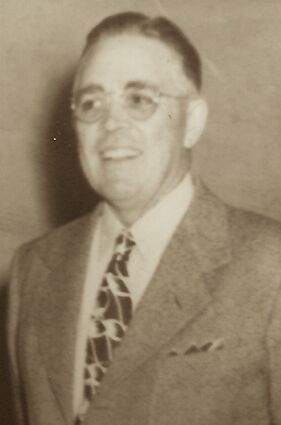 Tucked between Lindsay and Porterville lies the little community of Strathmore. It owes its beginning to the Southern Pacific Railroad and also the rich farm land that surrounds it -- grain and citrus being the dominant crops. Mostly it was a quiet sleepy town and still is, but it had its moments of excitement. On November 26, 1926, shock paid the town a visit when an armed robber invaded the community.

Strathmore traces its beginnings to the late 1800s. By the decade of 1910, the town was on a firm footing. In December 1912, a reporter with the Lindsay Gazette visited and was "mighty surprised to see the development." He wrote, "New buildings were everywhere," and noted that conditions looked favorable for a bank.

Officers of the Pioneer Bank of Porterville also took note of the vitality, and in August 1913, they opened a Strathmore branch. Later the bank changed its name to the Pacific Southwest Trust & Savings Bank. The financial institution fit in nicely with the community, but 13 years after it opened its doors, a big surprise would come.

George Pinegar lived in Visalia. The 25-year-old man had worked at various jobs including farm work, and he even worked for Southern California Edison for a time. On the evening of November 25, 1926, the young man, now unemployed, traveled to Strathmore with evil intent. He was going to rob the bank. He bored a hole into a window, unlocked the latch and climbed inside. He hid there waiting for employees to arrive. At about 6 a.m. the next morning, the janitor entered and went to the basement to fire-up the furnace. Pinegar stayed hidden. At 9 a.m., teller John Davidson arrived.

Pinegar, armed with a .32 caliber pistol, confronted Davidson and tied him to the furnace door. Minutes later, Bank Manager Edwards entered, and he too was confronted by Pinegar who demanded all the money. Edwards gathered $3,000 from the safe and gave it to him. The robber also tied him up and fled on foot with the loot. Both bank employees freed themselves and called the authorities including the Tulare County Sheriff's Department.

Tulare County Sheriff Deputies Ben Gurr and John Hazen raced to the scene to hunt for the robber. It had been raining so the two followed the robber's trail in the mud leading into McGaffney's orange grove. As the lawmen trudged through the mud they spotted a pair of mud-caked shoes stuck in the crotch of an orange tree, so they knew they were close. Soon Deputy Gurr saw a man clinging to a branch in a neighboring tree. One hand was holding the branch and the other hand clinched a pistol.

Gurr leveled his rifle at the man and ordered him to drop the gun. In a piercing wail, the man shouted, "Don't shoot me boys, please!" But he didn't drop the pistol, in fact, he never moved. As the lawmen got closer the man appeared like a statue. Later, Gurr described Pinegar as "frozen with fear." 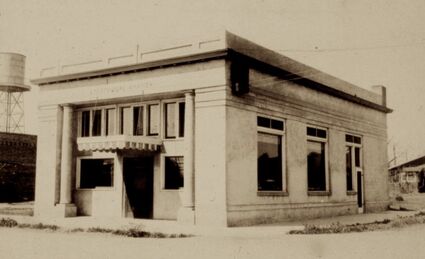 The bank in Strathmore that was robbed by Pinegar, circa 1920 [Photo courtesy Tulare County Library History Room]

The lawmen reached up and pried Pinegar out of the tree. When he landed on the ground, Gurr, who later would be elected Tulare County Sheriff, grabbed him and forced the pistol out of his hand. Inside his shirt pocket was the $3,000 taken from the bank. The young robber was deathly afraid and exhausted from all the mud that had gathered on his feet.

Justice was quick. Within six hours of the bank robbery, George Pinegar was standing before Superior Court Judge J. A. Allen charged with bank robbery. The young man sobbed as he pled guilty. He asked for no leniency, and he received none. Pinegar was sentenced to five years to life in San Quentin State Prison.

The Strathmore bank would be robbed at least once more, this time in 1931, the same year the bank closed for good - the victim of a bad economy and holdups. In 1970, the Strathmore bank building was demolished.