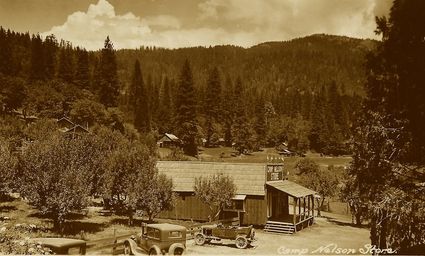 Soon after the road was finished, the Camp Nelson Store and surrounding area was made accessible. (Photo circa 1930)

The Sierra Nevada has provided people with beauty and escape for hundreds, if not thousands of years. John Muir called the 400-mile-long, 70-mile-wide mountain chain the "Range of Light" and once proclaimed, "The mountains are calling and I must go." And many have felt the same magnetic attraction.

Some mountain lovers are lucky enough to live in the high country, but the rest of us must be content with periodic incursions. Fortunately for us living in Tulare County, we have easy access to a good number of wonderful mountain escapes, all right in our own backyard. After all, about one half of the county lies in the Sierra.

For the adventurous traveler, trails abound, many of which can take us into the wilderness of the backcountry. For the less adventurous, there are plenty of picturesque mountain communities like Three Rivers, California Hot Springs, Mineral King and Springville - all accessible by automobile. Then of course, there are the granddaddies of them all, Sequoia and Kings Canyon National Parks.

But there is another gem - a community that got its start thanks to John Milton Nelson, and bears his name. Today, we call it Camp Nelson.

John Nelson was born in 1830 in Ohio. He lived for a time in Missouri and Illinois and by 1850 he was on a California-bound wagon train. He arrived in Placerville and for the next several decades, this restless man lived in numerous places and operated businesses in Visalia, Bishop, Arroyo Grande and in Oregon.

By 1886, he was in Tulare County homesteading land above Porterville. He built a small home and planted apples. The Nelson place became a popular stopover spot for cattlemen and sheepmen as they took their herds to summer pastures in the high country. Hunters and fisherman camped on this hospitable man's land as they made their way to their favorite spots.

This entrepreneur saw an opportunity and enlarged his house, and the two-story remodel became a hotel. He added a few cabins and further developed his land, and it soon became known as Nelson's Camp. Even though he improved it, there was no automobile road to it, so it remained somewhat isolated. But for many visitors, isolation was what they wanted.

At the turn of the century, Nelson's health began to decline. On August 3, 1909, he died peacefully at the age of 79. His life had been full, but not without heartache. Married twice, he lost both his wives and of his five children, he buried three.

He had been a miner, flour and lumber mill operator, packer, and had done so many other things. But during his life his real love was the mountains, especially his beloved retreat. 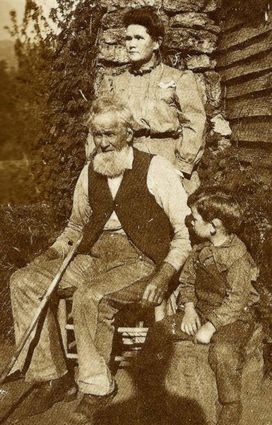 John Nelson is shown here in 1905 with his daughter Emma Smith and his grandson Nelson Smith.

After John's death, his daughter, Emma, and son-in-law Charlie Smith took over the operation. By 1922, a road suitable for automobiles made it to the camp. In 1937, the camp was sold and after that, different families operated it over the years. In 1951, electricity arrived. By the mid 1960s, winter road access came to Camp Nelson, making it easier for year-round living. Today, many own cabins there and use them as second homes.

Jeanette and Don MacMillan, a farming couple near Tipton, have been cabin owners at Camp Nelson since about 1973. They love it and call the community a "tight-knit family place where you know everyone and everyone knows you."

Today, there are limited services at Camp Nelson. Other than a restaurant, a small market and a basic hardware store, there isn't much else, except for many cabin owners. What it lacks in services, it more than makes up for in hospitality. Sure sounds like John Nelson's kind of place.

To get there, take State Route 190 east out of Porterville about 33 miles. The road is curvy in spots so take your time and enjoy the scenery.