The headline from the Exeter Sun for Friday, October 25th, 1929

The Tulare County town of Exeter has many bright spots and important claims to fame in its history. It was home to the famous red Emperor grapes, was selected to have a beautiful Carnegie Library, and was one time headquarters of the popular Visalia Electric Railroad. But 93 years ago, one unfortunate incident cast a dark shadow on the town's amazing historic achievements. An event so noteworthy that the Exeter Sun published an "extra" edition of its newspaper bearing the headline "Race Riot Throws City Into Turmoil."

In the early 20th century, California was fast becoming one of the most important agricultural states in the union. Marginal land was being transformed into productive ground thanks, to a great extent, to expanding irrigation. As useable acreage grew, so did the need for agricultural workers. Word spread throughout the world that California farmers were hiring. Foreign workers and "Dust Bowl" migrants responded to the call, especially in the late 1920s and 1930s. Thus, California became home to many different labor groups. As the number increased, so did sparks of labor unrest.

One such group came from the Philippine Islands. By 1929, it was reported that 65,000 Filipinos were working in the Golden State, with about 500 living in Tulare County near Exeter. They worked on ranches like the ones owned by E. J. Firebaugh, Charles Glaze and C. A. Hahn, and lived in camps on the ranches.

E.B. McKevitt, manager of the Giant Oak Ranch in Exeter, explained the local labor situation at the time, saying that often there were more workers than jobs, and added "Emperors have been late and there has been little work in the Exeter district." Finding a job in the fruit working industry had become extremely competitive. Tension between the white workers and the Filipinos was rising.

On the evening of October 23, 1929, local unrest reached a boiling point when at the Exeter carnival grounds, a white fruit worker exchanged angry words with a Filipino worker, apparently over a girl. The anger carried over to the next day when a Filipino stabbed white workers Adolph Borgman and Harry Lathan near the Kirkman Pool Hall. Both Anglo workers were taken to the Exeter Hospital, although neither had life-threatening injuries. The Filipino suspect fled the scene.

Sparked by the stabbings, a group of about 300 white workers formed and turned into an angry mob. Armed with clubs and rocks, they rushed to the Firebaugh Ranch where they confronted the Filipino workers living there. The foreign workers were pelted with rocks as they fled in their automobiles. Then the mob set fire to Firebaugh's barn, destroying it and about 20 tons of hay and a $3,000 tractor. Before leaving, the rioters smashed the windows of the Firebaugh home, apparently unhappy that the family had hired Filipino workers.

The angry men then went to the Charles Glaze and Cliff Dungan ranches and stoned the Filipino workers there. The violence lasted into the early morning hours of October 25th. The Filipinos fled the Exeter area, with about 200 going to Visalia. 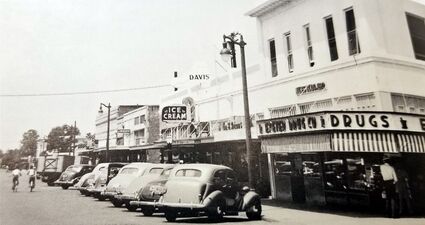 A peaceful Exeter street scene in about 1948. (Photo credit Exeter Then and Now by John A. Mangini)

The first responding lawmen arrived at the Firebaugh Ranch as the mob was leaving. Deputy Sheriff S.B. Sherman (who later was elected Tulare County Sheriff) was first to arrive, followed closely by Exeter Police Chief Alva Joyner, Constable Charles Mackey, and Exeter officers W. A. Stillman and M. C. Griggs. Tulare County Sheriff Robert Hill and other deputies followed, and the hunt for the Filipino assailant and the rioters began.

The so-called Exeter race riot made news throughout California, and for obvious reasons, the story even found its way to the Philippine Islands. Clearly, it was not a proud moment for the normally quiet little town. But sharing history, unsanitized with warts and all, is important, and as contemporary journalist Dan Walters wrote nearly 20 years ago, "History is history - some of it is positive and some of it is negative, human imperfection being what it is."