Farmersville - An Old Town with an Interesting Past 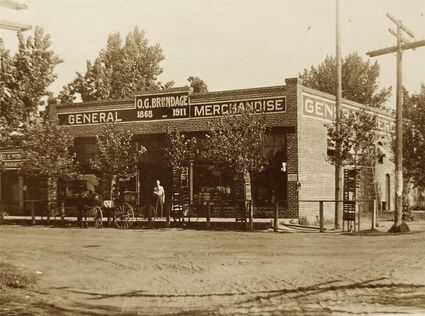 This is believed to be the second Brundage store built in Farmersville. (Photo circa 1911)

Tulare County is a big county with about a half million people living within its boundaries. Many live in the eight incorporated cities. One is Farmersville, which happens to be one of the oldest of the group. It traces its beginnings to 1866 when the town sprang up in Four Creeks Country.

On December 12, 1866, the Visalia Weekly Delta reported that there was a "new village building up on Deep Creek" called Farmersville. At the time of reporting, the town already had a store, a doctor's office, a drug store, a blacksmith shop and an application on file for a post office.

Over the years, the little settlement has made history, and like all towns, it was a mixture of good and bad. For example, it was in Farmersville in 1880 that a young man named James McKinney got into a scrape that launched him on an ugly journey down the road to becoming one of the county's most notorious badmen.

A year later, another lad would give the town notoriety, this time in a good way. In 1881, Orval was born to Daniel and Cynthia Overall, a prominent cattle and ranching couple living near Farmersville.

The Overall family would call Farmersville home until about 1886, when the family moved to Visalia after Daniel successfully ran for public office. He was later elected Tulare County Sheriff and would eventually escort James McKinney to state prison, an official act that the badman resented all of his life.

The couple's son, Orval, would go on to distinguish himself as one of the best football and baseball players to ever come out of Tulare County. Not only did this Farmersville native excel in sports while attending U.C. Berkeley, he went on to become an amazing baseball pitcher for the Chicago Cubs, playing a dominant role in the 1908 World Series.

By 1888, Farmersville was firmly established with the name Brundage dominating business and civic life. A large hotel owned by C. P. Brown and the Brundage general store were the centerpieces. The family store was the big draw to the town, but its popularity came with a cost. On December 12, 1895, thieves broke inside, forced open the safe, and made off with $20.00 in cash.

In 1907, more unwanted attention came to the little town when a man named Walter C. Scott attacked and killed several people in San Francisco. It was a horrendous crime carried out by someone described as a "madman" who hailed from Farmersville.

The town seemed to be a magnet for bad news as it entered the 20th century. In the 1900s, the town organized a chamber of commerce, which disbanded. The town opened a movie theater that closed its doors. The town even had a newspaper for a time, then the Farmersville Herald stopped its presses.

It seems like there was always a dark cloud following the little town. In 1947, the Visalia Times Delta reported that Farmersville had "a reputation for being tough." It added "that people from Porterville, Visalia and nearby communities who wanted to have a 'tough' evening would go to Farmersville."

But in the same article, they also shared some positive news. Instead of being a town made up of mostly transients like it had been, the demographics were changing. More residents were buying homes, which created more stability.

Town leaders began to seriously consider taking the next logical step - becoming incorporated. By 1960, the advocates for incorporation were ready to put the question to a vote. In September, Farmersville voters went to the polls, and by a vote of 253 to 195 incorporation passed and Farmersville became Tulare County's eighth incorporated city. 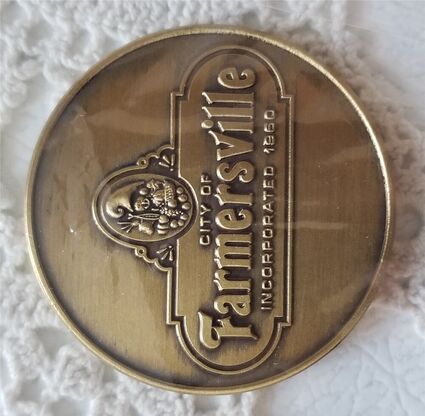 One side of the Farmersville token.

A five-member city council was elected and the town began its march toward improved respectability. But the first years that followed were difficult. Beset with numerous resignations of leaders and staff, city government struggled. By the late 1960s, there was serious talk of disincorporation. Fortunately for the majority, that step back never happened.

To be sure, over the years the little town had more than its share of tough times and bad press. But through it all, the residents of Farmersville have been loyal and resilient.

In 1985, the town took a step forward. It was a small one, but it revealed a lot. Farmersville minted its own coin, unofficially called the "Farmersville Franc." It was a limited edition brass token that honored the town's 25th anniversary of incorporation. The community hoped, like the coin, Farmersville would be around a long time.