Inside the Visalia Ransacker Investigation 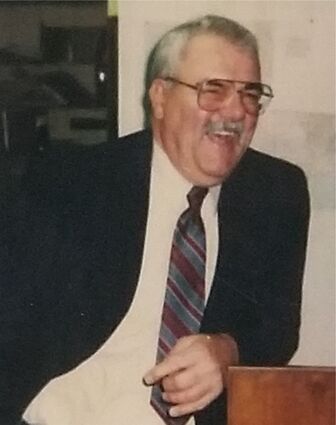 Sgt. John Vaughan at his retirement from VPD in 1996.

The Program: At 6 p.m. on Wednesday, September 29, at the Ponderosa Lecture Hall on the campus of College of the Sequoias, a free program sponsored by Visalia Heritage and the college will be presented, featuring retired Visalia Police Sergeant John Vaughan as the guest speaker. The Visalia community will finally hear the stories and learn the investigative techniques used during that intense and confidential investigation into the hunt for the Visalia Ransacker, now called the Golden State Killer.

The program will include never before released material from the lead investigator. It is sure to be interesting, revealing and jaw-dropping. An open microphone will be available to those in attendance who care to make a comment or ask a question. It's a true crime story that took place in Visalia, so plan on attending. Seating is limited. Refreshments will be served. For more information email Terry Ommen at histerry@comcast.net or call (559) 901-3227.

The Background: Visalia is a town of about 150,000 people lying in the middle of the San Joaquin Valley. It's the Tulare County seat and traces its beginning to 1852, making it the oldest town between Los Angeles and nearly to Stockton. It's a pleasant place to live and despite its growth, the community has been able to keep the small town feel.

Like all communities, it has crime, but most consider it to be a peaceful place. But in the mid-1970s this peaceful and safe feeling was severely challenged. Back then, Visalia had a population of about 34,000 and was experiencing a series of disturbing prowling incidents and unusual burglaries, all that led up to a cold-blooded murder – the details of which left the community traumatized and fearful.

At about 2 a.m. on September 11, 1975, a burglar removed a window screen to the Snelling home, reached inside and unlocked the door. Once inside, the masked man awoke a 16-year-old girl and escorted her at gunpoint through the backdoor and into the backyard. The girl's father, Claude Snelling, heard the noise, confronted the kidnapper, and was shot twice. The man pushed the young girl aside and fled the scene. She survived the attack but her father died from his wounds. Without question, the father's actions saved his daughter's life.

After the Visalia Police Department examined the series of crimes, it was determined all were committed by the same man. Immediately following the murder of Claude Snelling, the department formed a three-man investigative team with Sgt. John Vaughan in charge. For about the next eight months, Agents Duane Shipley, Bill McGowan and Sgt. Vaughan tirelessly investigated the crimes committed by the man who became known as the Visalia Ransacker.

The urgency to find the serial criminal ratcheted up even more when about two months after the Snelling murder, the Ransacker shot at Agent McGowan while he was on a stakeout. The bullet missed McGowan, but hit his flashlight sending shrapnel into McGowan's face. The investigator survived but the incident added even more to the community's fear. But soon after the McGowan incident, the Ransacker crimes stopped, at least in Visalia.

When the Visalia Police Department special team officially disbanded, the three investigators continued to follow up on other leads as they developed. During the next decade or so, similar crimes, including murders and rapes occurred throughout the state of California. Investigators from various jurisdictions pursued the criminal without success.

For years, law enforcement officers, cold case detectives, private detectives, amateur crime sleuths and bloggers investigated the numerous statewide cases. On April 24, 2018, thanks to forensic genealogy, Joseph James DeAngelo, a former Exeter police officer, was arrested in the Sacramento area. It was learned that from about 1974 to 1986, DeAngelo committed hundreds of burglaries, rapes and homicides throughout California, including Visalia where his crime spree began. It had taken 43 years, but finally the Visalia Ransacker, now called the Golden State Killer, was identified and in custody.

DeAngelo pled guilty to 13 counts of murder, one being the Snelling murder, and 13 counts of kidnapping. Currently, he is an inmate at Corcoran State Prison serving a life sentence without the possibility of parole.

During his crime rampage in Visalia, the team worked tirelessly to identify the Visalia Ransacker. Hypnosis, link analysis, interviews and many other investigative techniques were used, most of which were never revealed to the public.

But now the investigation methods and techniques used by them can be shared. Sgt. John Vaughan, now 80 years old, remembers the case in great detail and has agreed to "let us in" on the once secret details of the investigation. Sadly, Duane Shipley and Bill McGowan have both passed.