The Battle of the Bottle 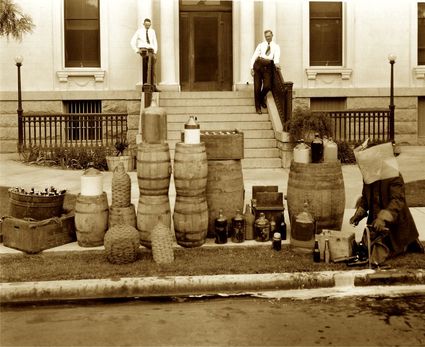 The manufacturing and sale of alcoholic beverages during Prohibition was illegal. During that time, illegal beverages were confiscated and destroyed. Seized alcohol is shown here in front of the Tulare County Jail at Church Street and Oak Avenue in Visalia. Sheriff Court Smith is standing on the right on the stairway watching over the destruction. (Photo circa 1922)

It has been called shepherd's delight, a social lubricant and even the nectar of the gods. But despite this collection of pleasing sounding names, there have been others not nearly as flattering, like rotgut, devil's brew or worse. Of course, they all refer to alcoholic beverages.

For centuries, in fact for millennia, holders of these two opposing opinions have debated and sometimes clashed over the controversial concoction. The argument was usually not over the drink itself, but rather the behavior exhibited by those who consumed too much - way too much.

Like the rest of the world, Tulare County had its share of alcohol drinkers and abusers, and Visalia seemed to have considerably more than its share. The jail booking records and the many accounts chronicled in the old newspapers tend to bear that out.

One-hundred-thirty-eight years ago, Visalia had an extreme example of alcohol abuse gone bad. In December 1872, Jim McCrory, who at one time had been a well-respected man and had even served as the town's deputy marshal, viciously killed his long time friend in a drunken rage.

McCrory had a history of violence when intoxicated, so when he killed his friend, a vigilante mob lynched him from a bridge railing over Mill Creek.

However, most incidents involving public intoxication were not as dramatic. In 1932 for example, a Farmersville area rancher overindulged and ended up in the city "drunk tank" to sleep it off.

The rancher's dog that had come to Visalia with his owner, followed his master to the lockup. For 18 hours, the dog kept vigil outside, occasionally barking. When the jailor would go out to quiet him, the canine, unhappy with his owner's treatment, would chase him back into the building. Only the rancher could quiet his faithful companion, shouting orders to him through the jail bars.

Over many years, the large number of incidents of drunkenness almost always had a grating effect on people's lives, not to mention the physical and emotional toll on the inebriant. Families were left destitute, domestic violence was a regular occurrence, and the few social services that were available were taxed to the limit.

Publically and privately, the "evils" of alcohol were a popular topic for discussion, especially for the newspapers. In April 1863, the Visalia Delta covered one very active evening in town. "Whiskey held high carnival last Saturday night and Sunday morning. Knock down and drag out was the order of the day...," it reported.

Other organizations like the Woman's Christian Temperance Union and Anti-Saloon League, and many churches joined in the liquor conversation. With the perceived strong sentiment trending against alcohol, politicians oftentimes got involved.

George Washington Wyllie, a California State Assembly member from Dinuba, was one of the first to get on board. He is credited with authoring legislation in 1911 that allowed towns to vote whether they wanted to be "wet" or "dry." His law became known as the Wyllie Local Option Law, and was well received throughout the state.

But the Dinuba legislator's legal creation turned out to be just a tiny step in what became control of the liquor trade. In 1917, the granddaddy of all legislation, the 18th Amendment to the U.S. Constitution, was proposed by Congress - a law that would prohibit production, transportation and sale of intoxicating liquor. In 1919, the amendment was ratified and Prohibition became law throughout the United States. 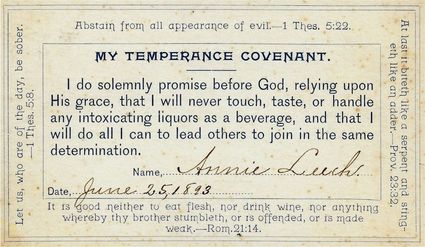 This 1893 Temperance Covenant card created by the Presbyterian Temperance Committee was used as a commitment to abstain from alcohol.

Without the benefit of a crystal ball, one might have believed that Prohibition would have ended the "liquor problem." At first, it had positive results, but it did not curtail people's love for alcohol-laced drinks. Prohibition did not prohibit possession of alcohol, so people found ways, almost all illegal, to get it.

By the late 1920s, its use and abuse was higher than pre-Prohibition. The public was ready to scrap the experiment. In December 1933, the 18th Amendment was repealed creating the 21st Amendment. Again, each state had control of alcohol within its borders.

On December 5, 1933, the day after the official repeal, alcohol could again be purchased in Visalia and elsewhere in California. Authorities held their breath wondering how the consuming public would react to the new freedom.

The following day the Visalia Times Delta reported, "Police found no 'drunks' on Visalia streets last night or this morning, received no calls to settle any disturbances..." But just how long would this good public behavior last?