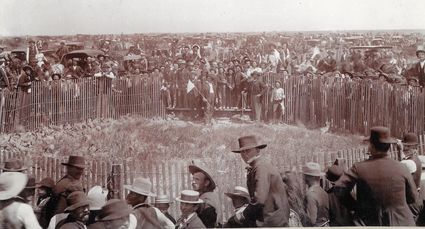 This photo shows a rabbit drive in 1891 somewhere in Tulare County (but not Traver). Notice the size of the crowd.

In its heyday, the little town of Traver had quite a reputation - not just for one thing, but several. Huge amounts of wheat were shipped by rail from there and as a result the town gained a reputation as the largest wheat shipping center in the U.S. Much of the soil around the town was covered with alkali so the town became known for the unwanted salty substance.

Then there was the violence. For a short time, the little town's streets ran red with blood with many calling it "wild and wooly," and some even comparing it to the rough and tumble California gold mining town of Bodie.

But there was one more reputation that attached itself to Traver. For some reason, the area around the settlement had a large population of jackrabbits. Some people found the loping long-eared creatures cute, but not the agriculturalists. Farmers called them a curse and they had good reason. The critters had an insatiable appetite for vines, trees and crops of all kinds, and if left uncontrolled, they could devastate a field.

So farmers needed something done about the jackrabbit menace. Agriculture was a huge part of the economy around Traver, and actually all over Tulare County. As a result, in 1891, Tulare County Ordinance #46 was enacted, putting a 1½ cent bounty on each critter's head.

The plan worked to a point. Solo hunters actively killed jackrabbits and thereby picked up some quick cash. But the animals continued to be a problem. More needed to be done, so an inventive and unnamed exterminator came up with an idea - the rabbit drive. The creator probably wasn't from the area, but the farmers around the town embraced the idea wholeheartedly and many drives were held over the years.

One of the town's most famous drives was held on April 8, 1893, during the eighth year celebration of the founding of the town. On the big day, Traver was decked out with flags and bunting. The day-long celebration included shooting contests, a lance tournament, music of all kinds, and a grand ball. But of all the events held that day, the rabbit drive was the biggest.

An estimated 6,000 people had come to town to be part of the birthday party. It helped that in advance, the San Francisco newspapers announced the big event. The Overland Monthly, a San Francisco magazine, even sent writer Charles S. Greene and a pencil artist to town to write a story about the festivities.

At about 10 a.m. participants in the drive were directed to form a line in a large open area north of town. The line formed, stretching an estimated two miles long and made up of about 4,000 individuals and 1,000 horse drawn wagons and buggies. 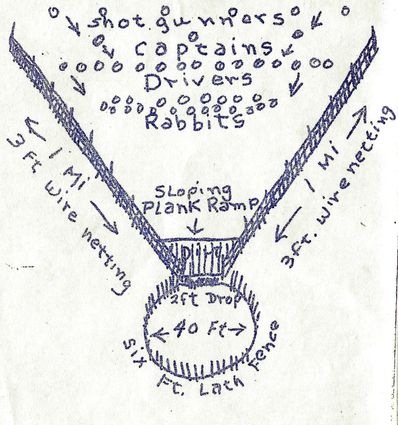 Drawn by June Aguiar, here is a diagram of the typical Traver rabbit drive.

When the signal was given, the line moved forward in unison toward a fenced funnel-shaped area. Jackrabbits and other critters ran from the line of people and into the funnel. As the rabbits ran deeper into the funnel toward the narrow end, the congestion of rabbits increased. The narrow end of the funnel had a opening which led to a small fenced pen. As the bottleneck of rabbits squeezed into the pen, men and boys joined them inside and began clubbing the animals to death.

Greene, who witnessed the carnage, asked the clubbers if they felt it was cruel. The response was, "If you'd had a young vineyard eaten up by them, you wouldn't say it was cruel."

A Visalia Daily Morning Delta correspondent who was also in attendance reported, "The drive was not successful in point of numbers, as only 500 (jackrabbits) were corralled." But other Traver drives were much more profitable, sometimes eliminating 10,000 jackrabbits in one drive."