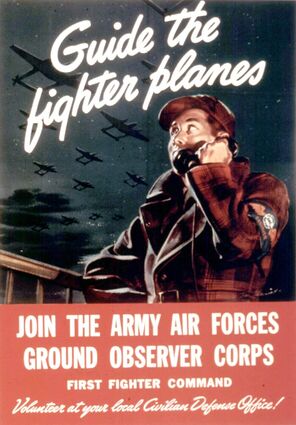 World War II brought out love of country in so many ways in America. Thousands of young men and women joined the armed forces and, on the home front, many civilians made countless patriotic contributions like buying war bonds and collecting valuable commodities like scrap iron. Intense patriotism was everywhere including Tulare County.

Many of Tulare County's home front efforts are well known, but there was one that is frequently overlooked - the work of the Ground Observer Corps (G.O.C.).

After the surprise attack on Pearl Harbor on December 7, 1941 by the forces of the Japanese military, one of their generals was heard declaring that cities on the American mainland would someday be bombed. Those words, and other warnings like them, were taken to heart by U.S. civil defense leaders, and the U.S. Army Air Forces Aircraft Warning Service was created, and from it the Ground Observer Corps was born.

The United States knew that with long Pacific and Atlantic coastlines, the country was vulnerable to attack. The expansive coastlines could be patrolled by fighter aircraft, but to do so would be expensive and take away the valuable weapon from the "fighting front." So the Ground Observer Corps became a big part of protecting the country.

During the war, some 14,000 observation posts were created, staffed by about 1.5 million volunteer spotters. Their job was to watch and listen for enemy aircraft 24 hours a day, seven days a week. When an observer, oftentimes using binoculars, spotted suspicious aircraft, he or she would note features of the plane, any unique engine noise and its direction of travel, and would immediately report the information using a telephone assigned to the post. The observers never knew who they were calling.

Once the call was made, another volunteer receiving the call at the "filter center" took the information and forwarded it to a specialist who would assess the information, and determine whether the plane was enemy or friendly.

Mrs. Ruby Fife, living in rural Visalia was one of the observers, probably at the McKellar farm location, and wrote in her journal, "Each community had a volunteer group that manned the towers day and night. I volunteered four hours once a week, taking my four-year-old son with me. We watched the sky and if a plane came in view, we got as much information as possible and rushed to the telephone and reported the direction of flight and the make of the plane if we could identify. We had pictures of the different makes of planes posted near the telephone. In our training session, we learned to identify the trainer planes from Sequoia Field as they were not to be reported." She added, "There was no trouble getting volunteers to keep watch day and night, regardless of weather."

Photo on the left is the replica observation tower at the Historic Seven Sycamores Ranch as it stands today. [Photo courtesy Bob McKellar] On the right is the original tower used during World War II. In the tower, left to right, are Bob McKellar, his mother Vernice, Mattie Bly, and Noreen McKellar. [Photo courtesy Ruby Fife]

Bob McKellar, owner of Historic Seven Sycamores Ranch in Ivanhoe, was proud of his family's role in the observer program. A wooden tower was built on his property in 1941 and stayed in operation for two years. He remembers in it was a "crank phone" that was used for reporting. The tower stood for a time after the war, but McKellar replaced the original tower and built an exact replica of it near the same location. He liked the old tower because of what it represented. For him, it serves as a memorial. Today, to commemorate its importance, he has a plaque mounted.

Today, almost all of the thousands of observation posts have disappeared throughout the country. It is very possible that the McKellar's rebuilt replica tower is the only example remaining in Tulare County, and maybe even in the country.

Just how many observation posts existed in Tulare County during the war is not known, but I would guess there were several. Annie R. Mitchell, well-known Tulare County historian, shared with me that she volunteered for a time as an observer in an observation tower at Recreation Park in Visalia.