Millwood and Stagecoaching to the Timber 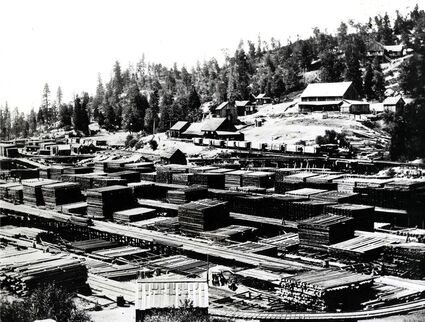 Millwood in its heyday. Notice stacked lumber, the train and numerous buildings. (Photo circa 1895)

Stage travel in the mid to late 19th century was a common form of transportation. Even though the ride could be bumpy and dusty, it was preferred by many to riding horseback, bicycling or walking. So, entrepreneurial businessmen established stage lines to the more popular destinations. One of those routes was the Visalia-to-Millwood line.

Millwood, first called Sequoia Mills, was a popular mountain settlement just over the Fresno County line near General Grant National Park. At slightly over 5,000' elevation, it started as a lumber camp in the pine and redwood forested area.

During the summer, hundreds of loggers worked there and at nearby smaller logging operations. Married workers lived in small cabins and single men lived in basic dormitories.

Workers were not the only people that found Millwood comfortable. Tourists from the valley floor especially were drawn there as well. They came to escape the treacherous valley heat and to experience the beautiful Sierra scenery.

By the mid-1890s, Millwood was a bustling community with a shoemaker, photographer, barber, blacksmith, doctor and an undertaker. It had a post office, general store, butcher shop, livery stable, school, two hotels and several saloons and brothels.

Life in the camp was busy, mainly with men engaged in all the work connected to logging. Loggers at the mill worked six days a week and used their day off to relax and play baseball. As the workers were generally a rough and tumble lot, the evenings oftentimes were spent drinking, which could lead to fights.

One of the valley towns that offered stage service to Millwood was Visalia. In the early 1890s, the stage left Visalia in the early morning for the all-day trip to Millwood via Camp Badger. The return trip would leave Millwood at 6 a.m. and arrive in Visalia by 4 p.m.

The ownership of the line changed hands several times, and with it the departure times and locations. Sometimes the stage would start at the Palace Hotel and other times from the Visalia House.

The stage carried the U.S. mail, light freight and passengers. The bumpy and dusty ride oftentimes became an adventure for both animals and humans. In December 1897, the stage was returning to Visalia with Cal Brotherton the stage driver and seven passengers on board. It had recently rained and at a curve on the mountain road, the stage slipped in the mud and turned over completely. All on board were injured, although not seriously, but Brotherton was knocked unconscious. Visalia Dr. A. B. Cowan treated Brotherton and he recovered.

In 1904, the stage had another close call when Milo Bacon, the stage driver, was approaching Badger on the return trip to Visalia. The mill was closing for the season, so the stage carried about nine passengers and their belongings. Four were in the cab of the stage, a couple on the seat with the driver, and the rest were on top.

As the stage approached a steep grade near Badger, the top-heavy coach rolled over. One passenger, Paul Hansen, was pinned under it, but miraculously, the others escaped injury. The passengers were able to lift the vehicle back onto its wheels, freeing Hansen. The injured man and the others arrived in Visalia where Dr. Mark Pettit treated Hansen who escaped serious injury. 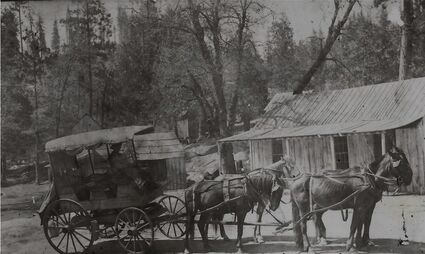 One of the early stages used on the Millwood-Visalia line. (Photo circa 1892)

Humans were not the only victims. In July 1906, on a day described as "hot and sultry," the Millwood stage arrived in Visalia. As it stopped, one of the horses collapsed to the ground. The animal was unhitched and sprayed with water. Fortunately, the horse survived heat exhaustion.

In November 1908, the Daily Visalia Delta announced that "Millwood as a mountain town is approaching dissolution." The new Hume-Bennett Lumber Company on Ten Mile Creek (Hume Lake) had "taken away all the business of that former thriving village." As a result, "the stage line (Visalia to Millwood) would stop on Saturday, November 21, 1908."

After that, the Millwood mail would be left at the Badger Post Office for pick-up. The once popular stage line was no more. Today the site of the old ghost town of Millwood serves as a reminder of the short-lived existence of what many believe was a destructive logging operation.