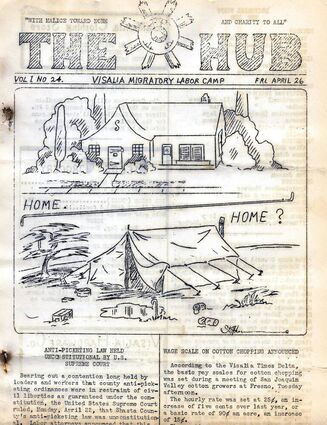 Shown here is the front page of the Friday, April 26, 1940 The Hub newspaper. The slogan at the top reads "With Malice toward None and Charity to All."

Over the years, Tulare County has been very fortunate to have many newspapers. Whether it was the small town of Traver that had the Traver Advocate, or the larger town of Tulare that had the Tulare Advance-Register, these community newspapers provided readers with a glimpse of world and local news.

A number of the county papers lasted just a short time and shut down operations. Others merged with neighboring publications, and still others published for a long time. In fact, one Tulare County newspaper has operated under one name or another continuously for 163 years - the Visalia Times-Delta, and it still publishes today.

Newspapers have been around for a long time and have a rich tradition of filling an important need in society. Thomas Jefferson, one of our country's founding fathers, commented on their importance saying, "Were it left to me to decide if we should have a government without newspapers or newspapers without a government, I shall not hesitate a moment to prefer the latter." Humorist Mark Twain was more whimsical saying, "If you don't read the newspaper, you're uninformed. If you do, you're misinformed."

Most towns at one time or another have opted to have some newsy publication, but there are other small like-minded groups of people that had them, too. One was the Visalia Migratory Labor Camp, later renamed Linnell.

The farm labor community had its beginning in the Great depression of the 1930s. A large number of Dust Bowl migrants, many who decided to leave their devastated midwest homes and farms, loaded their families and a few belongings in their pickup trucks, and headed to California. Because of its large agricultural industry, Tulare County became the stopping point for many of the dispossessed. When housing and sanitation for the new arrivals became a problem, the federal government stepped in as part of President Franklin D. Roosevelt's "New Deal" and built migrant labor camps. Several were built in California.

In July 1938, construction began on one of these centers. It was named Visalia Migratory Labor Camp - named "Visalia" even though it was not in the county seat and was actually located much closer to Farmersville. On Saturday, December 15th, occupants moved into the first group of 150 prefabricated steel single room dwellings. Rent was 10 cents per day for each building. As the camp developed, it "resembled a small city...with its own water works and sewers, streets that were named, a community hall, utility building, health center, administration office...," reported the Exeter Sun.

Starting on November 10, 1939, the camp printed a weekly newspaper called The Hub. Every week, the eight-page mimeographed publication was made available to the 1,000 residents of the camp.

The Hub newspapers, at least in the early years, were laid out by hand using typewriter and pencil art illustrations. The paper, including the masthead, wasn't fancy, but it served its purpose. The front page oftentimes included satirical artwork that depicted the plight of the farm workers and poor people.

It appears that many issues had an editorial opinion column similar to the one that appeared in the April 26, 1940 edition (pictured above). The column reminded the residents that the camp had rules of conduct and that the "community marshals and flag boys" were responsible for enforcement. It added a warning that the community "court" could dispense justice, including fines and hours for community service. The paper included minutes from camp council meetings and reports of committees and clubs. 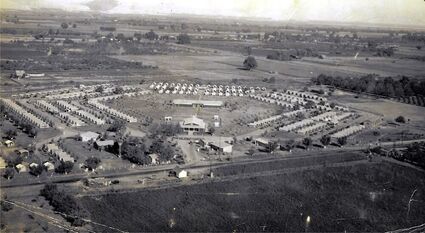 Each issue had advertisements from nearby merchants, like the handlettered display ad from the Mohawk Filling Station - A Place with a Smile "across from the camp entrance." In the April 19, 1940 paper, Visalia's Cafeteria Shoe Store advertised a big shoe sale as part of the grand opening celebration. In the same issue, it was reported that "'the ladies of the camp are having a health class every Friday afternoon in the sewing room." The "Personals" column, reported, "We are very sorry to hear about Mrs. Ike Ramsey going to the hospital again. We are hoping she soon will be back in our neighborhood."

Exactly how long the camp newspaper published is not known, but it appears that at least 25 weekly papers circulated. There were probably many more. Regardless, The Hub has earned a place on the list of Tulare County newspapers, and fortunately several issues are available today.