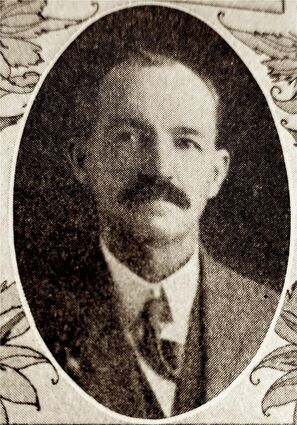 Former California Assemblyman George Washington Wyllie was injured in a dynamite blast on his ranch in 1915. (Photo circa 1909)

Recently, the National Safety Council reported that the number of preventable injuries from accidents in our country is at an all time high. In fact, accidents are the third leading cause of death after heart disease and cancer. From paper cuts, to burns, to stray bullets, to vehicle crashes, the list of potential injury causing mishaps goes on and on. Truly, the world is a dangerous place! But accidents are not just recent phenomena, they were also common in the past. Historical records are filled with mishap stories, many of which resulted in death. But frequently victims were lucky, narrowly escaping the clutches of the grim reaper. Tulare County had its share of lucky ones, too.

One of the county's early close calls involved Victor Kinson, a well-known and popular stagecoach driver for the Butterfield Overland Mail Company. In 1860, the "Wild Dutchman" as he was known, was driving a stage between Fort Tejon and Visalia, when without warning, the bridle of one of the horses broke. Fearing a crash, the gutsy driver jumped from the seat of his moving stage to the harness equipment nearest the broken bridle. As he landed on one foot, the pressure wrenched his ankle, but luckily he did not fall. Kinson made it to Visalia with his fractured bones and was treated by Drs. Baker and Thompson.

Then there was the double close call by Tom Bacon and his wife of Orosi. In 1909, as the couple was riding side by side on horseback near Camp Badger, Tom's wife's horse "switched" its tail, hitting her husband's horse, causing it to bolt and buck. Tom was thrown to the ground. As his wife raced down a steep hill on horseback to help him, her horse began to buck. Sensing disaster, she jumped off, injuring herself slightly as she hit the ground. But her husband was not as lucky. He was knocked unconscious, lying there with cuts and gashes all over his body. Dr. Blackledge of Orosi treated the couple and luckily, both survived their ordeal.

Farms and ranches were frequent hosts for accidents, and George Washington Wyllie found that out the hard way in 1915. The former California Assemblyman who represented Tulare County in the state legislature, was working on his ranch near Orosi. His farmland suffered from "hard pan" soil, so the elderly man was using dynamite to blast holes in the ground to plant orange trees. He was close to one of the charges, and it exploded prematurely throwing him several feet into the air. He landed on his back, and when help arrived, Wyllie wasn't a pretty sight. Part of his nose was ripped off, jaws were broken, both eyelids were cut, eye sockets were filled with dirt, right ankle was fractured, and he had bruises everywhere. Wyllie survived the brutal accident, but his injuries left him nearly blind and permanently scarred his body.

The story of Clifford Vincent is a reminder that some occupations are more dangerous than others. In 1909, the professional painter was working on Grant Kirkman's new building in Exeter. While on the roof of the two-story building, the "painters hooks" that held the scaffolding in place slipped and Vincent and the scaffolding fell nearly 30 feet to the ground. He broke an arm, a leg and crushed several ribs, but the lucky painter survived his brush with death. 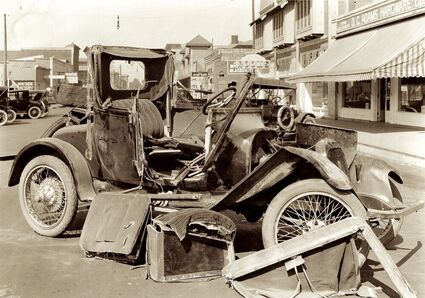 This automobile accident occurred in Visalia near Main and Bridge streets in about 1920. No details are known, but based on the damage, it looks serious.

Even visitors to the county had close calls. In 1947, two men from Inglewood, California made an unplanned visit to Tulare County. They were in a Luscombe plane, and for some unexplained reason were flying low over the John Allen ranch near Pixley. When the pilot banked his plane to avoid power lines, he clipped the top branches of a eucalyptus tree and the plane slammed into the ground, narrowly missing the ranch house by 10 feet. Everyone was lucky. The two men in the plane survived, as well as the Allen children who were about to leave the house to play on their outdoor swing. Their delay saved them from certain death as the plane smashed into the swing set.

This is just a small sampling of narrow escapes in Tulare County history. Obviously, there were many more. Thanks to improved product safety, more consumer awareness and regulation, today's safety record is much improved, and has no doubt added years to our lives.