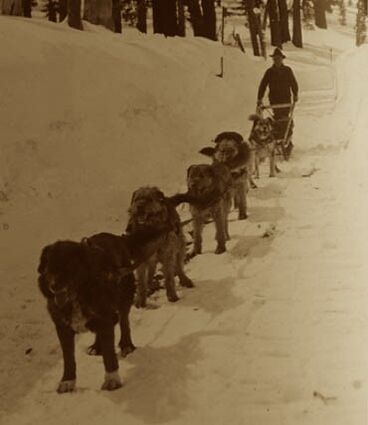 Jerry Dwyer and his dogsled team near Kaiser Pass east of Fresno. (Photo circa 1921)

The Big Creek Project in the Sierra Nevada east of Fresno is one of the early 20th century marvels. The undertaking required massive engineering, large amounts of capital and many years to build. It is an amazing story in so many ways, but there is one small part that many times gets omitted in its telling.

The often-neglected piece of the story isn't about technology, engineering or water distribution, but rather about Southern California Edison Company's famous dogsled team led by Jeremiah "Jerry" Dwyer, and their weeklong visit to Visalia.

The story of the dog team began in 1920 when the Edison Co. was working on the huge San Joaquin River hydroelectric venture in the area around Huntington Lake. During the long winter months, hundreds of employees were left to work in the Florence Lake area, almost totally cut off from the outside world. The snow could get 20-30 feet deep, especially at Kaiser Pass, and with no mechanized equipment capable of making the trip, there was no easy way of getting supplies, medicine or mail to these isolated workers.

So Edison looked to Alaska for help. There they found Jeremiah "Jerry" Dwyer, a seasoned musher and his seven-dog sled team. He was a quiet man who rarely talked about himself, but always had plenty to say about his dogs.

His favorite, Babe, the powerful lead dog, was three-quarter wolf. Patsy was part Alaskan malamute and gordon setter; Dooley was a cross between malamute and shepherd; and Riley was half wolf and half St. Bernard. The remaining three - Barney, Whiskey and Trim - were part staghound and airedale.

Edison representatives were impressed with the team and were satisfied that "Silent Jerry," as he was called, knew how to handle the dogs. They were also convinced that the dogs and handler could survive the harsh winters in the Sierra high country.

A deal was struck, and Dwyer and his dog team became employees of Southern California Edison. The team became the winter lifeline to the workers, making daily trips from the Huntington Lake post office to the marooned workers at the high elevation Edison snow camps.

Harry Beidleman, secretary of the Visalia Chamber of Commerce, heard about Dwyer, his team and the unique assignment. He contacted Edison and asked if they could come to Visalia for an educational exhibition. He knew it was a long shot as they rarely were put on display, but surprisingly, Ballard, Edison's general manager, agreed.

Dwyer and his dog team began their weeklong exhibition on Monday, October 1, 1923, in the building at Church and Center streets. Additional wiring was brought to the building as a precaution in case the weather turned too warm. The dogs could not tolerate heat, so blocks of ice could, if needed, be brought in and additional electric fans could blow cool air on the canines.

Every day from 10 a.m. to 10 p.m., Jerry and his dogs were on display free to the public. The team was the highlight, but photographs of the Sierra back county and the Edison Big Creek Project were on display as well.

Day after day, adults and schoolchildren were thrilled by the amazing man and his dogs. J. E. Buckman, Tulare County superintendent of schools, sent a letter to all the schools encouraging attendance. As a result, school children from throughout Tulare County made the trip and word spread throughout the valley.

As expected, Dwyer shared very little about himself, but freely talked about his dogs, their pedigree and their habits. He fondly talked about his famous lead dog "Babe" who had died a year earlier. In describing his loss, he said her death hurt him more than he could have imagined, and he added that she died in his arms and did not suffer. Since then, Patsy had taken over as lead dog.

By Wednesday, almost 5,000 people had visited the exhibit and by Sunday, the number had grown to over 12,000. The "silent man of the north" and his dogs were a big hit. After a week, Dwyer and his team left Visalia bound for Huntington Lake to begin another winter season.

By the way, Dwyer buried Babe on Kaiser Pass and I believe the U.S. Forest Service sign paying tribute to that famous dog, can still be seen today.