The Life and Mysterious Death of William Clough 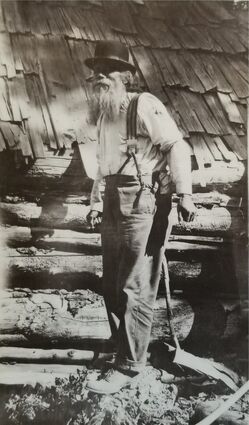 William O. Clough as he appeared in about 1901.

Some called him eccentric, while others saw him as a preacher, miner and explorer. Actually, William O. Clough (pronounced like "tough") was all those and more. He was a likeable man and was well known to those living in and around Three Rivers and especially Mineral King, the place where he spent so much of his time.

Even though his family came to the area around Three Rivers in the 1860s, Bill Clough's name burst into prominence in about 1885 when he found an elaborate cavern in the Sierra near the South Fork of the Kaweah River. It quickly took on the name Clough's Cave.

But there was so much more to this Tulare County mountain man than just his cavern discovery, and much of it revolves around Mineral King, the beautiful alpine setting where he lived and likely died.

His cabin was at the Empire Mine and from there he would do mineral "assessment work" for himself and others. Mining was his passion and much of his time was spent looking for valuable minerals and dreaming of striking it rich.

His fervor sometimes made him a target for practical jokes. In 1896, "Uncle Josh" shared a story of Clough and his friends, and it appeared in the newspaper. It seems the prospector had gathered some quartz samples from one of his mines. Without his knowledge one of the "boys" filed a couple of small chunks from a gold coin and mixed them in with his ore samples. When Clough crushed his specimens, "panned them out" and discovered the gold, he couldn't contain his excitement. But soon the would-be millionaire was disappointed when the prank was revealed.

Besides mining, his life at Mineral King also included doing work for the Mt. Whitney Power & Electric Co. Each year, the company hired him to "close the (water) gates on the high mountain lakes where water was stored for use in the powerhouse in the summer when runoff was low."

Although generally reclusive, the man did have a social life. He became the self-appointed greeter for visitors to the high mountain paradise. He enjoyed talking with them and it also gave him a chance to preach his brand of religion. His appearance must have startled many with his long hair and flowing white beard - all part of his religious belief system. He believed that if he did not cut his hair or beard, he would live forever.

Clough was an observant student of his mountain retreat and he would regularly pen long letters describing the people he met, and snow levels, and his prediction for irrigation water for the valley floor. He would report on fishing, and frequently would quote scripture when the spirit moved him. His widely anticipated letters would make it to the valley newspapers like the Visalia Delta and Times and they would publish them for all to enjoy.

During the winter of 1917-18, Clough was in Mineral King country like he always was, and on November 2, 1917, he closed the water gate at Franklin Lake. But then he went silent and from that point on no one saw or heard from him. 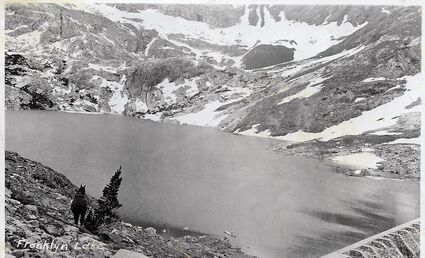 Franklin Lake was Clough's last reported location in November 1917. After this, he was never heard from again.

In the spring of 1918, search parties made trips to Mineral King looking for the man described as about 67 years old. Most had no luck, however. One group, while hiking the Franklin Trail, made several important discoveries. They found some of the missing man's torn clothing, a shoe with chew marks and what they thought was Clough's wrench - the one they believe he used to close the gates to the lakes. But they also made a much more personal and gruesome find - the missing man's beard. These grim discoveries cast a dark shadow over the chances of finding Clough alive.

The disturbing collection of evidence was delivered to Tulare County Coroner Albert Brooks. Clough's body was never found, although most believed the man was dead. But how and why did he die? Was it because of a medical condition, an animal attack, foul play, the elements, or some combination? Many believe that wild animals consumed his flesh and just left his bones strewn along the trail. Maybe in a morbid way, it is fitting that his remains are left scattered over this place he loved - a fitting tribute to the man from Mineral King.