George Stockton Berry and His Harvester 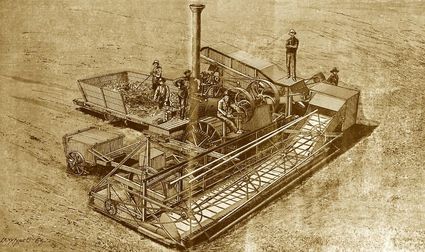 Berry's self-propelled harvester had a number of improvements and eliminated the need for animal power. (Drawing circa 1886)

The San Joaquin Valley has long been known for its highly productive agricultural land. Mention the valley and many people automatically think "bread basket." Tulare County is one reason for that reputation. Early on, the county captured the attention of the media and farmers looking for a place to earn a living off the soil.

As early as 1854, folks were talking about Tulare County. In fact, San Francisco's newspaper the Daily Alta California announced that, "Tulare County is fast settling with farmers," and the paper followed up calling it "one of the best agricultural and grazing counties in the state." But productive land requires more than just quality soil, it requires capable caretakers with good farming practices. Fortunately, from the beginning, the county has had all necessary elements.

In the 1870s and '80s, wheat was a major crop in the county. There were big ranches in the hands of families with names like Cairns, Mehrten, Roth, Bienhorn, Orton, Reed and Berry, each with thousands of acres in production.

Within this group, there was one man who distinguished himself and he became a well known name even beyond the borders of Tulare County. His name was George Stockton Berry, and is known as the inventor of Berry's Combined Steam Traction Harvester.

He was born in Missouri in 1847 and as a young boy came with his parents to California. He was raised a farm kid, so it wasn't surprising that in about 1875, the young man bought 2,000 acres of land near what is now the town of Lindsay. It was there that he developed a reputation as a model farmer.

In about 1880 while he was a big wheat farmer, he started thinking about a better way to harvest all his grain. His massive harvester pulled by 32-36 mules or horses was slow, especially during the summer months. Pulling the big heavy machine in the heat was hard on the animals and they died regularly from the strenuous work.

He tinkered with his machine and explored how to incorporate steam power into it for propulsion. He fabricated some prototypes at his ranch and by 1885, he had a working version. To everyone's amazement, the finished machine worked exactly like it was designed. He filed for and received a patent. He took charge of the manufacturing process and in 1886, he used his ranch as an assembly plant.

That same summer, a Visalia Weekly Delta reporter made a trip to Berry's Ranch to see the new machine in action. What he saw was a huge piece of equipment with several sections hinged together to allow it flexibility to maneuver over uneven ground. The implement was irregularly shaped, but it was roughly a square of about 38 feet. It had two steam engines - one to self propel it and drive the cutting blades, and the other ran the separator. The blade face was 22 feet long, allowing it to make a wide swath. The machine required an 11-man crew to operate, but no animals were necessary.

Prior to Berry's invention, grain harvesters were pulled by mules or horses. (Photo circa 1883)

As each wheat stalk was cut, the kernel was separated and taken by an elevator mechanism to a human "sacker" who manually bagged the seed. The straw that was the byproduct of the process was mechanically delivered to the men operating the boilers and it became the fuel for the steam engines.

Obviously impressed, the reporter for the Delta called the harvester a "marvelous invention." The article ended on a positive note, "We trust that Mr. Berry will realize well financially from his invention, it being justly his due."

George Stockton Berry was elected to the California State Assembly in 1888 and the State Senate in 1890. After leaving office, he continued to farm at his home ranch. He died in 1916, but his creative genius left a lasting agricultural legacy in Tulare County.