Goshen - The Land of Promise 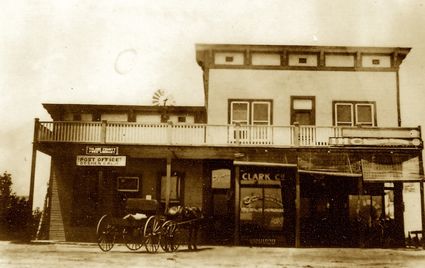 There is something special about the little town of Goshen and I believe much of its uniqueness is connected to its history.

When the railroad pushed its way through the San Joaquin Valley in 1872, it created new towns along the way like Delano, Tulare, Merced and Goshen. Easy access to the railroad line increased the likelihood of economic success for a community, so towns established on the route clearly had an advantage. As a result, Goshen began with high hopes for prosperity. And it didn't hurt that the railroad called the new town Goshen, a name from the Bible that meant "best of the land" or "land of promise."

There was no denying that Goshen's future was heavily linked to the railroad. The land was flat, close to Visalia and situated in the middle of the state, perfectly positioned to become a railroad hub. In 1888, Goshen was described as "the only center of the Cross Railroad systems at present running from Huron, Hanford and Lemoore on the west, to Visalia on the East." Trains were arriving from all directions and it was oftentimes called "Goshen Junction."

The town had a depot, of course, a hotel, restaurant, saloon and a blacksmith shop. But Goshen needed more than just trains and a handful of businesses. The town needed settlers willing to live and work there.

In 1888, Tulare County was already a major agricultural force in California, but the Goshen area had a soil problem - it was filled with dreaded alkali, a substance harmful to crops. It was so bad that train passengers noticed the white substance on the ground and walkways and called it snow. The unwanted condition undoubtedly slowed the number of settlers. To some, the land of promise was becoming the "land of alkali." But fortunately, help for the problem soil was on its way, thanks at least in part to P. J. Clark who found an effective way to counteract the problem.

By 1887, the community had its own newspaper called the Goshen Herald. The paper was a big booster for the town and an equally strong advocate for "law and order." In March 1887, when a local family was assaulted by a "disorderly character," the suspect was arrested and taken to the Visalia jail. Obviously, not satisfied with the action taken by authorities, the Herald reported, "He should have been horse-whipped by our indignant citizens...instead of being sent to a comfortable home with better food than he had been accustomed to..."

As the years passed, Goshen achieved more notoriety. In the 1940s, it became home to the colorful Goshen Mounted Police, a ceremonial group of Old West enthusiasts established by a few modern day cowboys including Warren "Spike" Moody. The well recognized group still exists and frequently participates in local parades.

Although Goshen never organized as a city or held municipal elections, at least on two occasions the community had an unofficial mayor. In 1894, George Eddy was given the ceremonial title of Goshen mayor and decades later, James "Jim" Rivers held the title. 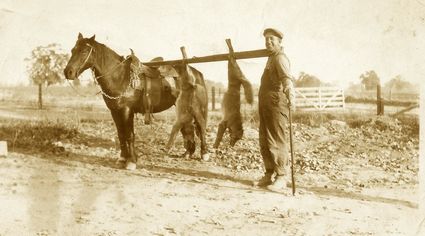 Jim Rivers, rancher and "mayor" of Goshen, is seen here with what appears to be two coyotes that he "bagged" on a hunt. Photo circa 1920.

And then there were the pesky jackrabbits. Goshen was known for an abundance of these critters that gave the local farmers so much trouble. Frequently, rabbit hunts or drives were held in the late 1800s to keep the crop-destroying varmints in check. Farmers were so anxious to rid themselves of rabbits that ammunition for the massive hunts was given away free.

For a time in the 1930s, Goshen had an active automobile racecourse called the San Joaquin Track. It attracted local drivers as well as big name racers from Ascot Speedway in the Los Angeles area, and Silvergate Speedway in San Diego. Then there was amateur boxing. In 1935, for example, fans at the new 1,000-seat open air Goshen Arena paid 75 cents to watch Johnny Foster, a fighter out of Tulare, slug it out with Stockton's Billy Azevedo.

Despite Goshen's occasional bursts of notoriety, the town never seemed to achieve the general success reached by other railroad towns like Bakersfield, Fresno or Modesto. But many loyal Goshenites might disagree. They like their town's history and the memories made there.