Staging in the San Joaquin Valley 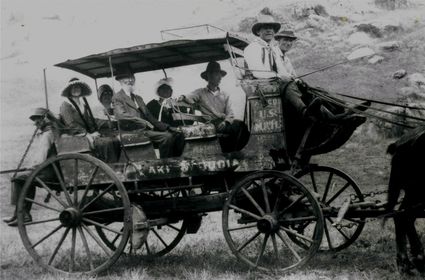 A typical stagecoach carrying mail and passengers. This is the Lake Sequoia stage circa 1900.

The stagecoach was a common mode of transportation in the southern San Joaquin Valley in the 19th century. For the most part, it served its purpose in getting a traveler from one place to another, but it also had its drawbacks. In fact, in most cases, those that chose the four-wheeled vehicle, usually pulled by horses, had a stronger sense of adventure and a higher pain tolerance than the average person.

And there was a reason coaches had such a negative reputation. The lurching and bone-jarring conveyance with little or no shock absorption had to follow the contours of the roadways, so a terrible road meant a terrible ride. The coach was also at the mercy of the team of animals pulling it and the expertise of the driver, so a temperamental team or a bad driver could translate into discomfort for the passengers. Then there were the elements. The coach body, usually only partially enclosed, was vulnerable to outside conditions that included rain, cold, dust and insects.

But despite its problems, the stagecoach served an important need. One of the most frequent uses was mail delivery. In that category, the most well known stage line passing through the southern San Joaquin Valley was the southern route of John Butterfield's Overland Mail Company.

It started in 1858 in St. Louis, Missouri, and followed a nearly 2,800-mile path to San Francisco, with Visalia being a timetable stop on the route. Passengers could ride along if they were willing to sit next to bags of mail, packages and other travelers.

Once the valley-related mail arrived in Visalia, it was sorted and prepared for delivery to many communities all over the San Joaquin Valley. Small stage companies would then take the letters and packages to the towns. For example, in 1859, Hice & Company stage line delivered the sorted mail in Visalia to points like Smith's Ferry, Centreville, Millerton, Fresno River, Buchanan Hollow, Mariposa Creek and Indian Gulch, all lying on the route between Visalia and Hornitos.

Over the years, Visalia became a commercial hub for many stages that provided service to nearby communities like Exeter, Tulare, Goshen, Three Rivers, Kaweah Colony and Mineral King, and also more distant places like Millwood, General Grant Park, Bakersfield and Gilroy.

With many different stage lines operating, the number of drivers increased as well. Many became experts in their trade.

Of the talented group, probably none was more well-known than Monroe C. Griggs-the legendary "whip" from Exeter. He drove stages between Exeter and Woodlake and drove the stage to Mineral King. Griggs shared his knowledge of the business in his book called Wheelers, Pointers & Leaders. 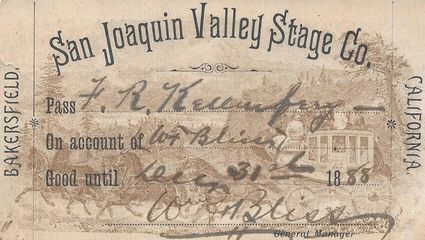 This is an original San Joaquin Valley Stage Company annual passenger pass for 1888. This company had its headquarters in Bakersfield.

An equally knowledgeable stage driver was Oliver "Yank" Booth. Reportedly, he was a relative of John Wilkes Booth, the infamous assassin of President Abraham Lincoln. Yank, as his nickname implies, was a staunch Union man. He came to California in 1853 and drove stagecoaches in the mother lode country and other places as well. He came to Visalia in about 1869 and continued to drive stages. By 1881, he had established himself and was called "Visalia's Jehu," a Biblical reference. He died in 1899 in Visalia and his obituary called him "one of the most expert stage drivers in California."

As automobiles, trucks and trains began to appear on the scene, stagecoaches began to disappear. On Thursday, April 13, 1911, the Tulare County Times newspaper noted the end of the stagecoach era, at least in Visalia.

It reported, "Beginning Sunday, for the first time in over half a century, no stage coach will be operated out of Visalia. Notice of the passing of this, one of the few remaining relics of pioneer days, was issued by Postmaster Lamberson this morning when he made the announcement that hereafter all mail for Woodlake, Auckland, Badger and the General Grant National Park, will be sent via the Visalia Electric Railway to Woodlake, to be there transferred to stage for the hill country. This will mark the abolition of Visalia as the terminus of the last of the stage lines."