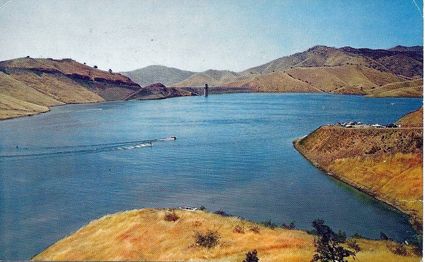 Kaweah Lake as it appeared in about 1967.

In 1850, Lt. George Derby, a topographical engineer with the U.S. Army, and his party explored the Tulare Valley (now called the San Joaquin Valley) looking for a good site for a military post.

In his report, he made important observations, especially about the water features. He noted the lakes of Buena Vista and Tache (Tulare) and rivers like the Kern, Tule and Francis. The Francis, now called the Kaweah River, seemed to attract his special attention. He wrote in his report, "The only point in the whole valley which struck me as at all suitable for a military post was the small portion of the interval land contained by the five creeks of the river Francis," an area that now is home to communities like Visalia, Farmersville, Ivanhoe, Woodlake and Tulare.

And the mighty Kaweah River has been attracting attention ever since, and for good reason. It has provided valuable water for drinking, irrigation, hydroelectric power and recreation as it delivers its precious cargo from the peaks of the Sierra Nevada.

But the Kaweah hasn't always been kind. Historically, it has frequently been the source of inconvenience, injury, destruction, and even death. When excessive rainfall and heavy snowmelt occurred in the mountains, the river would oftentimes overflow its banks, and the valley floor would turn into an enormous lake that inundated towns, washed out roads, damaged crops and generally made life miserable. Floods were a regular occurrence and residents frequently complained about the excessive uncontrolled water of the Kaweah.

After the 1906 flood, Ben Maddox, publisher and owner of the Visalia Daily Times, editorialized about the need for a dam. He was probably the first person with clout to propose such an idea, and others joined in. In 1917, the California legislature discussed the possibility of constructing a dam on the Kaweah for "storage and conserving," but nothing was done.

Periodically, and usually sparked by a damaging flood, the subject of damming the river would come up, but it wasn't until the 1937 flood - one that destroyed bridges and inundated the valley floor - that the U.S. Army Corps of Engineers tested the area around Lime Kiln Hill and Bell's Bluff near Three Rivers to determine if they both were adequate as anchor hills for a dam. They were, but still no dam was built.

The floods continued and a consensus for a dam grew, however, it wasn't until April 1958 that the money for construction was finally put into the budget, and not just for the Kaweah River but for a dam on the Tule River as well. That year, the two construction projects went out for bid. The Kaweah River dam was to be called Terminus, named for the end of the line for the Visalia Electric Railroad, and the Tule River dam was to be called Success.

On February 19, 1959, a groundbreaking ceremony for Terminus took place with an actual dynamite detonation set off by Harry H. Holley, long time watermaster of the Kaweah River. It was witnessed by about a thousand people with Visalia Mayor Ira Chrisman, president of the Terminus- Success Flood Control Dams Association, leading the festivities.

The construction project was awarded to the Winston Bros Co. and Green Construction Co., both of Monrovia, California. It was a huge endeavor that when finished, the "rolled earthfill" dam, with a maximum height of 50 feet and a crest length of 2,375 feet, would control about 560 square miles of drainage. Construction continued for the next three years and in 1962, the $24,000,000 project was finished. The dedication ceremony took place on May 18, 1962.

The diagram from the 1959 groundbreaking ceremony program.

Finally, the Kaweah River was under control. The Visalia Times-Delta expressed the sentiment of many when it commented that Visalia and the surrounding areas could now "look forward to wet years without the fear of a repetition of the nearly $20 million damage done by the 1955 flood."

Terminus did not totally eliminate all future flooding. Occasionally, due to unusual circumstances, localized flooding continues to occur, but the days of massive flooding are over.

In 2002, an upgrade to Terminus began - this time the corps' plan was to raise the height of the dam to allow for increased water capacity. Today, Terminus Dam and Kaweah Lake continue to be valuable valley resources for flood control, irrigation and recreation. By the way, Success Dam on the Tule River was completed in 1961, about a year before Terminus.