The Man Who Made History - Literally 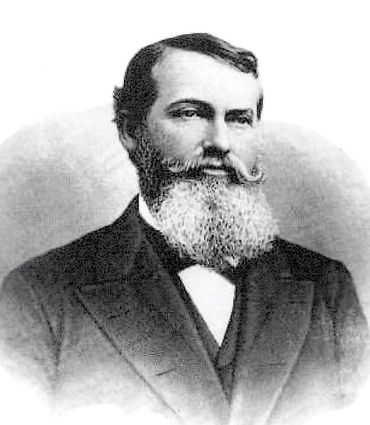 Thomas Hinckley Thompson was born in Dundee, Illinois on October 1, 1841. During his life, this bright and talented man did many things and did them all well. He was an engineer, farmer, furniture maker, real estate developer and even served as an officer in the Union Army during the Civil War. But of all his pursuits, he is probably most known, in central California at least, for publishing his classic Official Historical Atlas of Tulare County, California - the gold standard for local history.

Thompson came to California in about 1875 with an impressive résumé including important Civil War credentials. In 1861, he enlisted in the Union Army from Illinois and fought in numerous campaigns including Shiloh and Peach Tree Creek. He was "mustered out" of military service in 1864 with the rank of captain.

When he arrived in California, he settled in Oakland and went into the map publishing business, one of his many previous pursuits. In December 1884, he moved to Tulare County where he bought a ranch and began farming. Eventually, he opened a real estate, insurance and loan office at K and Kern streets in the city of Tulare. But of all of his ventures, publishing was the one that perhaps did the most to propel him into fame in Tulare County.

When he decided to create his Tulare County book, Captain Thompson wasn't new to the history publishing business. In fact, since 1870, he had published many maps and atlases, but had focused mostly on the Midwest states like Illinois, Indiana, Wisconsin, Minnesota and Iowa.

In 1890, Thompson made his plan official through the Visalia Weekly Delta newspaper. He shared that the process to be used was much like what he had done before. He would gather and compile statistical and other information within the county. He would illustrate the book with lithographs including maps of county cities and towns. He promised a quality product in artwork, paper and binding.

George W. Stewart, the publisher of the Visalia Delta strongly endorsed Thompson's project and wrote, "Knowing Captain Thompson well and being acquainted with the character of the work he has done, we commend his atlas earnestly and give him no hesitation in promising that his work will be satisfactory."

So in December 1890, Thompson began gathering material. He offered to sell space in the book to land and business owners. The more they paid, the larger and more elaborate their display would be. He hired a sales force to sell the space and take pre-publication orders.

In addition to maps and illustrations, the book would include an extensive section on county history, so he commissioned Myron Angel to write that portion. Angel was a good choice as he was a well-respected history writer who owned the San Luis Obispo Tribune newspaper. According to Stewart, "no one is better fitted to do such work."

On February 24, 1892, the book was finished. Stewart announced in his newspaper that he had just received his advanced copy and had thoroughly reviewed it. He couldn't be more impressed. The newspaperman seemed most pleased to see that the title page included an acknowledgement from the Tulare County Board of Supervisors that they had made it the county's "official atlas." 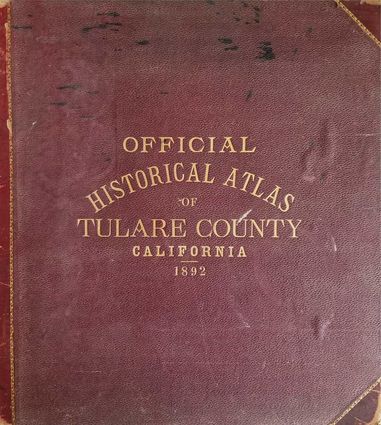 The original cover of the 1892 Thompson Atlas

Stewart proclaimed it was "the best historical sketch of Tulare County that has ever been written..." He summed up his assessment with, "No other work of any kind relating to Tulare County can compare with it in accuracy or value." He added, "Captain Thompson's work is by far the most valuable of anything in book form concerning our county and is cheap at the price of $15, for which it is offered." The Visalia Daily Times was equally impressed, reporting, "The captain has performed his work well and subscribers will realize it as soon as the map is shown to them."

Thompson was an active man in Tulare County and was clearly an important figure. He died in the city of Tulare in 1915 and was buried there. His legacy is huge thanks to his historical atlas.

The Official Historical Atlas of Tulare County, California continues to be a well-respected source for local history. It has been reprinted twice, once in 1973 and in again in 2006. It deserves a prominent place on any local history lover's bookshelf. Most public libraries in Tulare County also have it available and I encourage everyone to take a look.

I owe special thanks to two friends and local historians, Bill Allen and Troy Tuggle, who generously provided me with valuable material from their files.