In this part of the San Joaquin Valley, it's easy to take the word "Sequoia" for granted. After all, the famous national park is in our backyard and the word is used everywhere. It can be found on street signs, business names, and even on craft beers.

But the word Sequoia is so much more than a pretty name. It represents a special place created in 1890 as the nation's second national park, and the first to be established to protect a living thing - the giant sequoia tree.

The story of the national park's beginning is an interesting one.

In 1885, a group of men with idealistic dreams went to the U. S. Land Office in Visalia and each filed a claim for a 160-acre parcel of land in the mountains east of Visalia. These men represented the beginning of what became the Kaweah Co-Operative Colony - a socialist experiment created "to insure its members against want, or fear of want, by providing comfortable homes, ample sustenance, educational and recreative facilities and to promote and maintain harmonious social relations, on the solid and ground basis of Liberty, Equality and Fraternity."

According Burnette Haskell, the principal colony organizer, "The colony will not be for gain but for a place of rest and refuge...it shall be cooperative...."

The Kaweah Colonists settled on their land on the north fork of the Kaweah River near what is now Three Rivers. The group saw their future financial solvency connected to the profit from the timber in the higher mountains, so with pick and shovel, they began to manually hand dig a road to get to their revenue source. As they chipped and smashed away the granite rock and cleared brush on their 18-mile project, another effort, just as intense, was underway to stop them from cutting the timber, especially the giant sequoias.

George W. Stewart, a newspaperman and ardent advocate for the protection of the giant sequoias, was leading the effort to stop the colonists, and was working with the federal government to do it. Even though Stewart and others had an interest in saving the big trees, they had another concern. When the group of men filed claims for land en masse, there appeared to be signs of fraud to the claims, as several of the applicants had used the same San Francisco address. Land office authorities were alerted to this anomaly and the settlers were under serious scrutiny. 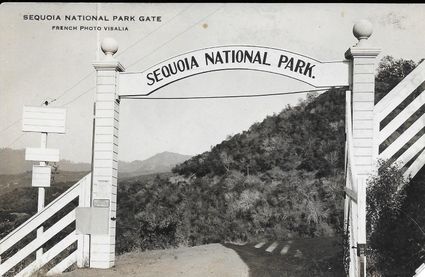 The colonists worked long and hard on the road, but they also struggled internally. Without a steady source of income, the colonists were living in poverty, and complaining and unhappiness were common conditions. By the fall of 1890, only 31 families remained with the colony. In September the effort of Stewart and others was paying off. Congress passed a bill creating Sequoia National Park, and on September 25, 1890, President Benjamin Harrison signed the legislation. The high timber was now off limits to the few colonists remaining and the giant sequoias were saved.

Eventually, the Kaweah Colony as an organization disbanded, however a number of colonists remained in the area. To add insult to injury, the 18-mile colony built road became the main route into the newly created park. There is no evidence the colonists were ever compensated for their backbreaking work.

Would Sequoia National Park have been created without the pressure of the Kaweah Colonists? I'm sure it would have, but I believe it's pretty clear the creation was hastened by the men with pick and shovel.

By the way, George W. Stewart is honored as the Father of Sequoia National Park.