Famous Showman Had His Start in Tulare County 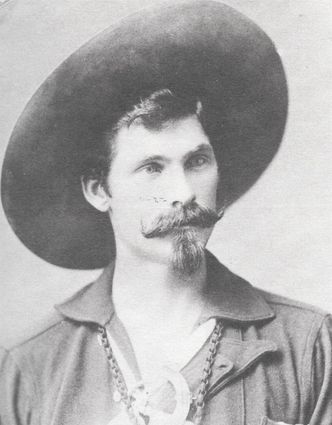 Arizona Charlie as he appeared in about 1884.

He was a western man through and through. Lean in frame, he stood 6'5" and wore buckskin clothing. He was a crack shot, an expert on horseback and when performing, he made rodeo fans cheer with delight. So who was this bigger-than-life man who cut his teeth in Tulare County and became known throughout the world as "Arizona Charlie"?

Abraham was born to John and Margaret Meadows on March 10, 1860 on the family homestead near Elbow Creek just outside of Visalia. His father was a cattleman and a preacher, so the name Abraham, with obvious Biblical roots, was not a surprise.

John was a staunch "state's rights" man who supported the sentiments of the South as the country entered the war that was anything but civil. When the country elected Abraham Lincoln as President, John declared "no son of mine shall bear the name of a president who brought this shameful war upon us." So in protest, he changed baby Abraham's name to Charles.

Charles and his brothers and sisters grew up around cattle and the young boy quickly learned the life of a cowboy. He could ride, shoot and wrangle, and learned his skills all while attending school in Visalia.

In the 1870s, California passed laws prohibiting cattle from roaming freely, a move designed to protect crop farmers. So in the late 1870s, unhappy over these restrictive cattle grazing laws, the Meadows family moved their ranching operation to the Tonto Basin of Arizona near Payson. There in 1882, Charles father was killed by the Apache Indians at his Diamond Valley Ranch. Upset, Charles began pursuing those he felt were responsible. So add Indian fighter to his growing list of titles.

Charles began working the rodeo in Payson in 1884, and performed in Prescott and Phoenix as well. It was during this time he was asked to join a wild west show. He did and eventually caught the eye of Buffalo Bill Cody. Charles joined Buffalo Bill's Wild West Show and it was this famous showman who gave him the stage name Arizona Charlie.

A year later Arizona Charlie had his own wild west show. He toured different parts of the country and world, and on June 13, 1893, he even brought his show to Visalia.

In 1897, he caught gold fever, and headed for the goldfields of Alaska and the Yukon. After hunting for the elusive metal for a time, he settled in Dawson City, Yukon Territory. He started a newspaper called the Klondike News. In it he wrote about the people that made the area newsworthy including, of course, himself. Not the least bit humble in his self promoting article, he wrote that he was "the king of the cowboys, rancher, miner, wild west showman and all around frontiersman." He added that he was "famous in the southwest as an Indian fighter and known the world over as the greatest horseman on earth."

In 1899, Charlie built what he called the Grand Opera House, later renamed the Palace Grand Theatre. It was a fancy place and the miners were happy to pay for entertainment and alcohol. Feeling the need to move on, he sold the theatre and in 1901 he left Dawson City. 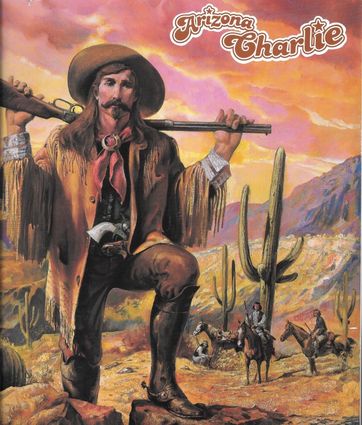 Artwork by Bill Ahrendt from the book dust jacket for Arizona Charlie, written by Jean Beach King and published by Heritage Publishers.

He ended up in Yuma, Arizona where he was a colorful and controversial figure around town. He purchased a Reo automobile and on one occasion he couldn't get it to stop. But always a man with a plan, he figured he could just run the vehicle into a sand dune. Fortunately, he didn't have to as he ran out of gas first. Entering his senior years with a host of medical problems, his friends cautioned him to take care of himself. His standard response was always the same, "It'll be a snowy day in Yuma, Arizona the day I die."

In 1931 Charlie was invited to be a guest of honor at the July 4th rodeo festivities in Visalia. He quickly accepted the invitation and drove to town in his Model T Ford. Charlie had a good time visiting with his many friends.

On December 9, 1932, Arizona Charlie breathed his last. The 72-year old dream chaser had become the victim of his own hand. He had suffered from varicose veins, and while performing his own surgery with a pocket knife, he bled to death.

By the way, the evening of the day he was buried in Yuma, snow fell. It was the first snow recorded in the 80-year history of the U.S. Weather Bureau there.