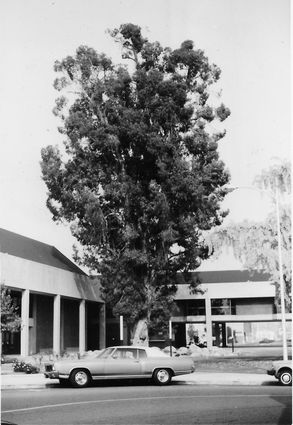 The David Douglass tree standing at the Visalia Convention Center. Circa 1980.

One of the groves of eucalyptus owned by the Eucalyptus Timber Corporation. Circa 1911.

John McCubbin standing by his tree. Circa 1926. (Photo courtesy of the Reedley Museum.)

The David Douglass tree standing at the Visalia Convention Center. Circa 1980.

Tulare County is known for its trees. The majestic giant sequoias and huge valley oaks seem to attract most of the attention, and rightfully so. Both have played important roles in our history. But there is another tree that should not be forgotten, and deserves more than a footnote in our history. It is the blue gum or more commonly called the eucalyptus. It is not native to Tulare County, but its presence here created quite a stir for a time.

Historians trace the beginning of the eucalyptus in California to the Gold Rush days.They credit its arrivals to the gold seeking Australians coming by ship to California, carrying the first sack of their native eucalyptus seeds. The trees were planted for shade and beauty at first, then nurseries began to carry them, and soon these rapid growing hardwood trees popped up throughout California.

In the 1870s, local Tulare County newspapers began reporting favorably on the many uses and benefits of eucalyptus wood going well beyond the shade they provided. Some advocates even argued that the trees had a positive effect on the climate in the area around where they were planted. Others said the wood from these specimens made great furniture, and added that the oil from it had medicinal qualities. Others, like railroad companies, saw great potential as ties, wagon makers liked the wood for spokes, and tool makers liked it for axe handles, and everyone liked eucalyptus for firewood.

By 1910, 10,000 acres of trees were planted commercially in Tulare County and it was predicted that more of these wonder trees were coming. Corporations bought up big sections of relatively cheap land, especially in the Pixley area. Companies like Sylvania Eucalyptus Corporation and the West Coast Corporation convinced people, usually from out of the area, to invest, enticing them with an offer of a small down and "easy monthly payments."

Another company called the Eucalyptus Timber Corporation was a big player in the eucalyptus business and established a nursery about a mile north of Pixley. They planted seeds in containers and after the trees were two years old and about 12-18 inches high, they were moved from the nursery.

But the popular "get rich quick" investment would soon face the harsh reality when a hard freeze hit California in 1912 destroying or at least seriously damaging 60-70% of the Pixley crop. This was followed by another blow to the industry when it was learned that many of the trees were the wrong variety for furniture. They grew quickly, but the wood twisted and was not suitable. Of the hundreds of varieties of eucalyptus, only a few could be used for furniture.

In an attempt to "salvage" their investment, companies and individuals turned to making eucalyptus oil for medicine, a much-needed commodity while World War I was waging. A plant was built just south of the railroad depot in Pixley to extract the oil, but the liquid proved too heavy for medicine. Another hit to the beleaguered industry.

Corporations and investors ran out of options and suffered serious financial losses. In fact, the Eucalyptus Timber Corporation "went broke." Eventually, the surviving groves of trees were removed to make way for other crops. The many eucalyptus trees around Pixley have almost totally disappeared, although remnants can still be seen in Pixley Park and various points along Highway 99.

The eucalyptus experiment became known as "Pixley's folly," but those that lived through it didn't blame the promoters of the idea. A.D. Cooksey, one of the local Pixley area witnesses to the massive planting, believed the corporations were "honest of intent." 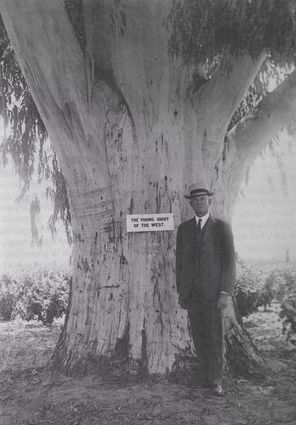 (Photo courtesy of the Reedley Museum.)

John McCubbin standing by his tree. Circa 1926.

But not all of Tulare County's involvement with eucalyptus was commercial. Two notable trees also earned their place in our history. One belonged to John McCubbin, who in 1889 planted a seedling at his ranch located about three miles west of Dinuba. It thrived and eventually became an attraction because of its size. A large limb broke off in 1962 and badly damaged it requiring it to be cut down. In its heyday, it was an amazing 131 feet high.

Another eucalyptus that gained recognition was called the Douglass tree, named for David Douglass who had planted it in 1860 on his property in Visalia. The giant landmark stood for many years in the heart of downtown and in 1988 it toppled over. A marker was placed at its former location near the Visalia Convention Center.