Tulare County Gets Exposure at the Exposition 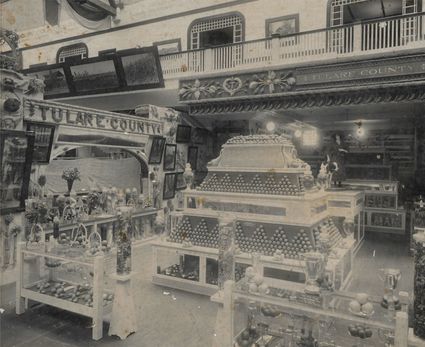 The Tulare County display at the Pan-Pacific International Exposition in 1915.

The Panama-Pacific International Exposition was by most accounts one of the most successful events in California history. The ten-month fair was held in 1915 and during its 288-day run, 19 million people visited the palaces, courts, buildings and attractions on the 635 acres in the marina area of San Francisco. It was created to celebrate and commemorate the completion of the Panama Canal and the 400th anniversary of the discovery of the Pacific Ocean by the Spanish explorer Vasco Nunez de Balboa.

The exposition opened to the public on February 20, 1915. Sculptures, paintings and architecture were a big part of the displays, but the counties of California were also provided space to highlight their resources.

Tulare County chose to take advantage of the opportunity to participate and the Board of Supervisors appointed Arthur E. Miot, Secretary of the Tulare County Board of Trade, to make it happen. The veteran booster of the county was the right person for the job, and his labor and skill paid off.

The county exhibit space was in the California Building, and Miot obviously chose to highlight the county's agricultural assets. The dedication of the exhibit took place on March 13th with about 200 in attendance, many making a special trip from Tulare County. Several speakers, including J. Sub Johnson, President of the Board of Trade gave interesting speeches encouraging visitors to come to the county.

"We want everyone who visits the exposition to come to Tulare [County] to see what we have to offer them. One thing we have of which we are proud of is 42,000 acres of citrus land," Johnson said, adding proudly that the county was the garden spot of the world.

Other speakers also spoke of the county in glowing terms. Tulare County "literally tops the United States" with Mt. Whitney towering over one corner of the county," one said. And another mentioned that the county at one time contained Tulare Lake - the biggest body of water in the state at the time. The Giant Sequoia trees were alluded to and one of the speakers, carried away by the enthusiasm of the moment, even called attention to the fact that the most famous train robberies in the world had been staged there, an obvious reference to the antics of Chris Evans and John Sontag. At the end of the ceremony, young ladies from the county handed out sweet Tulare County grown oranges to the visitors.

For the next months, throngs of people enjoyed more than 50,000 displays and more than 15,000 pieces of sculpture. Thirty-nine foreign countries participated with a number of them having their own buildings. Visitor reviews were glowing and the people had a great time.

But all good things must come to an end. Saturday, December 4th was the last day and the organizers had a big finale planned for the evening. The most dramatic part was the pyrotechnic display described as the "heaviest and most elaborate" ever attempted. More than a half ton of powder was used to hurl rockets, bombs and "star shells" into the air. Organizers declared the event a big success. They were especially proud that early estimates showed an exposition profit of more than $2,000,000. 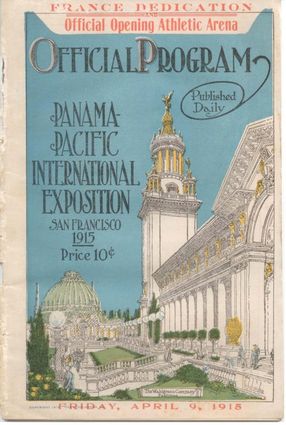 One of the daily programs from the exposition.

The agreement between the city and exposition officials called for clearing of all the land within four months after the event closed. Everything had to be removed, including buildings and statuary. To that end, exposition officials announced that some statues would be made available to cities and counties that wanted them at no cost other than the shipping expense.

Secretary Boyer, Visalia Board of Trade, made a request on behalf of the city, "asking that at least one piece of statuary be sent to grace" Visalia's courthouse park. It's not clear whether Boyer's request was ever granted, but Tulare County's requests eventually were granted when Solon Borglum's "Pioneer, A Reverie" and James Earle Fraser's "The End of the Trail" came to Tulare County. Both stood at Mooney Grove Park for many years.