The Mt. Whitney Club - Open to an Exclusive Few 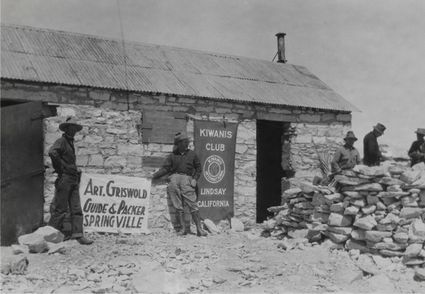 This Smithsonian Institution shelter building at the top of Mt. Whitney was built in 1909.

The mountains of eastern Tulare County are a series of peaks and valleys known as the Sierra Nevada. Named by the Spanish, the 400-mile long chain translates into "snow-covered mountain range." This famous land feature extends north and south through California and was romantically called the "Range of Light" by naturalist John Muir.

So much of California history is connected to this well-known range and Tulare County's past has a strong link to it as well. About half of the land in Tulare County lies in the impressive Sierra.

Trips into the Tulare County mountains would oftentimes begin in Visalia – a town known as the Gateway to the Sequoias. From here, tourists and locals alike would pack their gear and make their way east to the high country. There were many destinations and points of interest, including the Giant Sequoia trees, pristine lakes and streams for fishing, and for the more adventurous, Mt. Whitney, the highest peak in the continental United States.

Because of its stature, the 14,500-foot mountain on the eastern edge of Tulare County had quite an allure. Whether it was for the adventure, the scenery, bragging rights or a combination of these reasons, getting to the top of Mt. Whitney was a worthy quest, especially for those looking for a thrill.

Many prominent people made the trip. One was George W. Stewart, Visalia newspaperman and strong advocate for the Sierra. So it's not surprising that Stewart led an effort to form an organization of Mt. Whitney climbers. On the evening of May 11, 1901, Stewart hosted an intimate gathering of fellow mountain lovers in his Visalia home. As a result of the get together, the Mt. Whitney Club was formed two weeks later.

The club was open to all, provided they had made the ascent of Mt. Whitney, paid the $1 annual membership dues, and supported the objectives of the club. Above all, the group's primary purpose was "to aid in making Mt. Whitney, the crown of the Sierra... better known to the world."

Visalia was named headquarters for the group because the early leaders pointed out that it was Visalia where "the idea of establishing the great Sierra Forest Reserve originated... It was in Visalia, and by Visalians also, that the first steps toward the establishment of the Sequoia and General Grant National Parks was taken."

As the number of climbers increased, membership into the club grew as well. Many Visalians were added to the rolls, but enthusiastic climbers from all over California and the country paid their dues and joined. John Muir, the respected naturalist, and Theodore H. Hittell, the well-known historian and author, were both members. 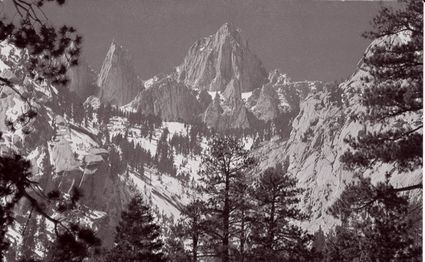 At about 14,500 feet, Mt. Whitney is the tallest mountain in the continental United States.

Many wrote about their Whitney trips and their published accounts still make interesting reading. An especially fascinating story was written by Anna Mills who made her trip to the mountain in the summer of 1878, before marrying Visalia businessman Robert Johnston. Credited with being the first female to the top, she documented her trip and accomplished it despite having a deformed leg. By the way, today Mt. Anna Mills stands at 12,064 feet in Tulare County as a tribute to this amazing club member.

On March 11, 1909, the Mt. Whitney Club met at Stewart's home for the last time. For nearly eight years they had promoted Mt. Whitney and shared their love for the Sierra. But now it was over. Many of the members of the club were residents of San Francisco, and the devastating earthquake and fire in 1906, had made it "almost impossible to locate them" and keep the group together. As a result, the club leadership decided to disband.

The club treasury of $20 was turned over to the Visalia library to be used to purchase books about the mountains.