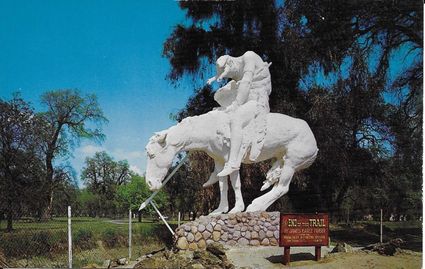 The End of the Trail statue at Mooney Grove Park prior to 1968.

Tulare County is known for many things including high mountains, rich agricultural land and giant sequoias, but as a rule it is not known for art. However, there is one exception -Tulare County is home to a sculpture that arguably is the most recognizable art object in the world. It is called "The End of the Trail" and the statue has become one of Tulare County's claims to fame. The story of the iconic tired American Indian on an equally tired horse is an interesting one and we should all know its link to the county and the American artist, James Earle Fraser, who made it.

Fraser was born in Winona, Minnesota, on November 4, 1876, and as a small boy traveled to the Dakota Territory with his father. It was there he played with the Sioux Indian children and appreciated their friendship. On one occasion he heard an old white hunter sadly tell his father that one day the native people would be driven into the Pacific Ocean. The words stuck with him, and the imagery would later become part of Fraser's very popular sculpture.

As a young boy, Fraser loved to draw, especially animals, and he began carving them when he found chalk-stone. At age 15, the talented lad began working with Richard Bock, a famed Chicago sculptor who was preparing for the 1893 Chicago World's Fair and Columbian Exposition. Fraser would later call the experience "wonderful training for an art-minded youth."

When he was 17, Fraser sculpted his first model of what was to become his classic "The End of the Trail" statue. His effort won him a $1,000 prize. Later he was asked to sculpt a much larger version for the 1915 Panama-Pacific International Exposition in San Francisco for which he was awarded a gold medal. He later recalled that $250,000 worth of photographs of the statue were sold by vendors during the exposition, and he regretfully said, "Who got the money, I don't know. I do know I didn't get any of it."

After the exposition some of the pieces of statuary that had been exhibited were made available free to public parks. Thomas Jacob, an official with the Tulare County Board of Forestry, heard that "The End of the Trail" statue was available, and he requested it on behalf of Tulare County. His request was approved and he went to San Francisco to arrange for delivery. On September 10, 1919, the statue sections arrived in Visalia.

It was assembled and placed on the banks of Cameron Creek in Mooney Grove Park. It had been built using temporary plaster-like material, so it was never intended to last indefinitely. For almost 50 years, the plaster beauty stood and somehow survived the temperature extremes and human abuse. County maintenance crews patched and repaired, painted and sealed the finish, and did everything they could to keep the 17-foot-tall piece of art together. 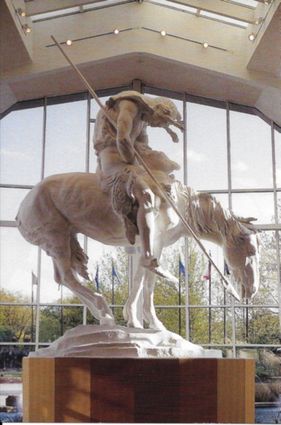 The End of the Trail statue at the National Cowboy and Western Heritage Museum in Oklahoma City after restoration was completed.

When Dean Krakel, managing director of the National Cowboy Hall of Fame and Western Heritage Center in Oklahoma City, found out that Fraser's "The End of the Trail" statue was in Tulare County, he began negotiating to get it for his museum. After long talks and negotiations with the Tulare County Board of Supervisors, an agreement was reached. Oklahoma City would get the original statue in exchange for a bronze replica.

In 1968, the original statue became an exhibit in Oklahoma City. On December 19, 1971, with a large crowd in attendance at Mooney Grove Park, the replica was dedicated.

Even though Tulare County no longer has the original Fraser art, the bronze replica that still stands in the park today is a reminder of our nearly century-old connection to one of America's best artists, and one of the world's most recognized statues.