The Wire Comes to Visalia 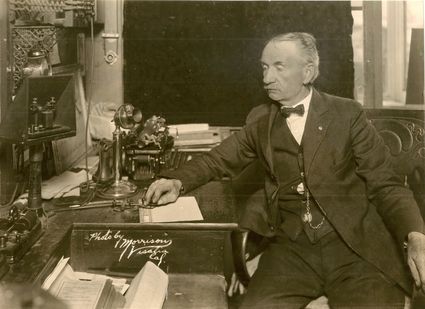 In the mid-19th century, communication with the outside world for little remote settlements in California was a challenge. Mail delivery was slow and important news would take weeks or even months to make its destination. The short-lived Pony Express and the Butterfield Overland Mail stages helped somewhat, but urgent messages were painfully slow.

Visalia was one of these secluded settlements, but by June 1860, thanks to the telegraph, the problem was about to improve. In the late 1850s, the Pacific and Atlantic Telegraph Company began building a telegraph line connecting Los Angeles and San Francisco with a route that would pass through Visalia.

Planting poles and stringing copper wire began in San Francisco, and by October 1859, the work crew had reached the valley floor at the base of Pacheco Pass. The Visalia Weekly Delta followed the crew's progress and on June 16, 1860, they reported the workers were at Cross Creek, just a few miles northwest of Visalia.

Quickly, the town began organizing a celebration to welcome the visitors, and on Monday, June 18th, a procession of decorated vehicles was ready to greet them. Abe Rapeley, Visalia agent for the Butterfield stage line took the lead in organizing the procession and offered his company's spare coaches and his personal buggy. One of the extra Concord coaches was loaded with the Visalia Brass Band, and another coach displayed a cloth banner printed with, "I'll put a girdle round the earth in 40 minutes," on one side, and, "Pacific and Atlantic Telegraph, Visalia, June 1860," on the other.

At about 11 a.m., the vehicles traveled north out of town and met the telegraph crew and their boss, Superintendent James Street. Street was cheered and congratulated, then invited to ride into town on Rapeley's buggy. The procession slowly caravanned into Visalia and as soon they were in front of the courthouse, a cannon was fired and a 100-gun salute welcomed the group.

The town was decorated with bunting and flags. Well-wishers lined the streets and music filled the air. While the celebration was going on, the telegraph workers extended the wire into town and the Exchange Hotel, located on the northeast corner of Court and Main streets became the telegraph office.

The festive procession paraded through the streets and made periodic stops with speakers at each one, extolling the arrival of the telegraph. Following the procession and speeches, the remainder of the day was spent socializing and townsfolk sent free telegraph messages courtesy of the company.

After Visalia, the crew continued their work southbound, and by July, poles were up at Fort Tejon. By October, they ended in Los Angeles.

Although he was not part of Visalia's initial telegraph operation, Joseph Clarence Ward was an important part of Visalia's telegraph history. J.C., as he was known, came to Visalia in 1869 as a veteran telegrapher. He was about 25 years of age at the time and already had become an expert in the field. He had been the personal telegraph operator for General Ulysses S. Grant during the Civil War, and had also known Thomas Edison.

When Ward arrived in Visalia, his plan was to stay only a few months, but he ended up staying his entire life. Not only was he Visalia's most well-known telegrapher, he was a prominent businessman, school board member, master mason and mayor.