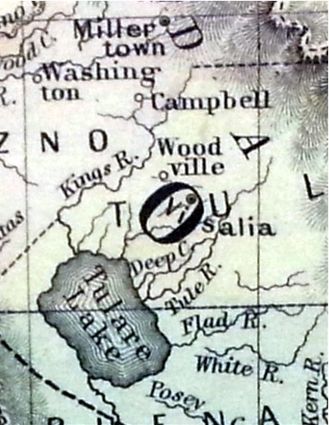 A map created by Augusta Mitchell, Jr. shows the Tulare Lake as it appeared in 1860.

Beginning about two million years ago, our valley was home to a huge freshwater lake. For hundreds – perhaps thousands – of years, it provided native people with food, and for a much shorter time, it was used by European settlers for fishing and hunting.

For much of its life, the lake was a substantial body of water, however, the lake's size was dependent on the rivers, creeks and sloughs that fed it with Sierra Nevada runoff. When the water deposits were generous, it reportedly spread to about 30 miles wide and 50 miles long. During drought years and periods of little mountain snow, the lake would nearly go dry. But despite its dramatic size fluctuations, in its heyday Tulare Lake was called the largest freshwater lake west of the Great Lakes.

Fortunately, one pioneer, James W. A. Wright, chronicled his lake experiences, giving us a glimpse of what this interesting body of water was like. Wright's Tulare Lake adventure began in Flap Jack Canyon on the road to Mineral King in 1881. While watering his horse, Wright met a man who had two freshly cut poles on his wagon. The man was T. J. Conley and when asked about the poles, he explained they were for the new masts for his schooner on Tulare Lake. The two men made plans for a future sail.

On May 15, 1882, Wright left his Hanford home to begin his six-day adventure. He boarded the 32' sailing ship called the "Water Witch," anchored near Lemoore. Captain Conley had rescued the boat and rebuilt it after finding it stuck in the mud at the mouth of the Kings River in 1880.

The next morning, they set sail on a gentle breeze. From time to time, the ship would pass large clumps of floating waterweeds that attracted lots of fish and terrapins (turtles). Fish jumped out of the water, and the heads of the small terrapins popped through the surface. Wright learned that the terrapins were the highly prized main ingredient in turtle soup, enjoyed in the fancy restaurants of San Francisco. Birds like cormorants, pelicans, grebes, swans, geese, seagulls and ducks dotted the shoreline and filled the air.

From time to time, the Water Witch would pass close to shore and coyotes were seen and heard. Cattle that had become mired in the boggy mud were easy prey for these aggressive carnivores.

Water Witch, the schooner that sailed the Tulare Lake, circa 1883

The lake had several islands, two of which were Pelican Island and Gull Island, both nearly a mile long and from 10' to 60' wide. The larger Skull Island was made up of sand dunes with considerable salt grass. Many human bones could be seen sticking out of the sand and Wright concluded that it was an old burial ground used by native people. Atwell Island was a large sandbar with considerable vegetation, about seven to eight miles long and one to two miles wide. It was located where the town of Alpaugh is today.

The excursion was very pleasant, however, one night proved to be rather frightening. They had retired for the evening, and at about 10 p.m. an unexpected storm rolled in. The ship began to rock violently and Captain Conley quickly lifted the anchor and headed to the safety of Gordon's Point near the mouth of the Kings River.

Wright, a Princeton graduate and former captain in the Confederate Army, documented his trip and sensed the lake was dying. He was correct, and today Tulare Lake is gone because of water diverted elsewhere. Shortly after Wright's voyage, the Water Witch too was gone, destroyed in a storm on the lake.