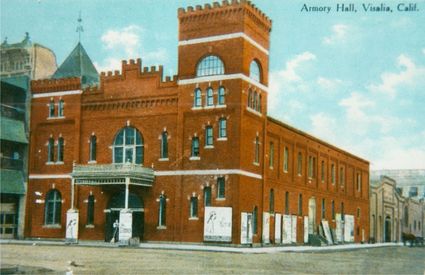 Suffragists Susan B. Anthony and Carrie Chapman Catt spoke at Armory Hall in Visalia in 1896.

As they traveled from town to town, the two famous advocates passionately pushed for women's right to vote. Because of their celebrity status, they made news everywhere they went, and on a fall evening in 1896, it was Visalia's turn to be wowed by Susan B. Anthony and Carrie Chapman Catt.

Susan B. Anthony was born in 1820 and was one of the most well known suffragists in the country. She had been an activist all her life and was dedicated to several causes, but none more important than voting equality. Carrie Chapman Catt, born in 1859, often accompanied Anthony on the speaking circuit and was also a suffrage leader. Catt would later be called the founder of the League of Women Voters.

As the pair made appearances throughout the state, Friday evening, September 25, 1896, was set for their Visalia visit. The program was to be held at Armory Hall, a two-story entertainment venue then located on the northeast corner of Acequia and Court streets.

On the day of the event, Anthony and Catt arrived by train at the Southern Pacific Depot at Oak and Church streets. The two were welcomed by a delegation of Visalia ladies and were invited to the home of Mrs. L. A. Johnson to freshen up. The honored guests were then escorted to Armory Hall.

The two national celebrities knew how to draw a crowd. A full 30 minutes before the program was to begin, the hall was packed to capacity with 800 people, all more than willing to pay the 10-cent admission charge. Mrs. A. P. Merritt, President of the Visalia Equal Suffrage Club presided, and she invited other suffrage club officers from Tulare and Hanford to sit with her on stage.

At 8:15 p.m., the two women entered the crowded hall to a thunderous applause from the audience and were formally escorted to their chairs. Susan B. Anthony was first to speak. She outlined the history of the women's suffrage movement and her involvement in it. She left no doubt about her position. "Women are as educated as men and are equally equipped to cast a ballot," she said. She emphasized the importance of the passage of the suffrage referendum on the November California ballot.

When the 76-year-old activist finished and returned to her seat, several bouquets of flowers were placed at her feet. She smiled and said, "I would a good deal rather be showered with roses than with brickbats and stones," clearly indicating she had experienced both.

Anthony was obviously a bit hit with the crowd. The Tulare County Times newspaper confirmed her popularity when they reported that, "every word that fell from the lips of that distinguished lady was eagerly listened to." 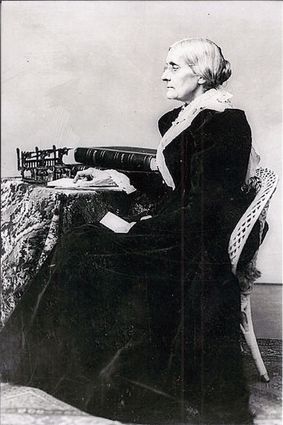 Catt spoke next and offered more suffrage history providing details of the success of the earlier Wyoming victory. The Times, obviously impressed with her and her speech, commented, "Her intelligent features and magnificent presence; her clear enunciation and graceful gestures; her concise statements and unanswerable arguments all combine to make her a power for the grand cause she represents."

The California suffrage referendum was soundly defeated in the November 1896 election. It wasn't until 1911 that women in the state of California won the right to vote, and it wasn't until 1920 that women's voting rights were extended throughout the country with the ratification of the Nineteenth Amendment to the United States Constitution.

Susan B. Anthony died in 1906 without seeing her dream come true, but Carrie Chapman Catt lived until 1947.