The Raid on Kingston 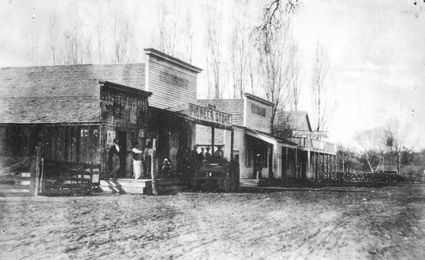 Kingston was once a busy town on the Kings River.

The little outpost began as Whitmore's Ferry on the Kings River. It later made a name for itself as a stage stop on Butterfield's Overland mail line in the 1850s. By 1861, when the 2,800-mile St. Louis-to-San Francisco route was abandoned, the little settlement already had a hotel, store, blacksmith shop and a well-established ferry service carrying travelers across the river. And by 1873, the town now called Kingston was being described as "one of the busiest little towns in Fresno County." It had achieved economic success-a fact that did not go unnoticed, especially by one of the most notorious outlaw gangs in California.

Tiburcio Vasquez had a violent history and roamed California at will, leaving crime victims and dead bodies behind as his calling card. He recruited a band of like-minded men, and the notorious Vasquez gang was formed in the 1870s.

Exactly when the plot to attack Kingston was hatched is unclear, but Christmas Eve 1873 will always be remembered as the time the little town became the focus of his criminal rage.

The assault began about 7 p.m. on December 24, 1873, when the Vasquez gang of about 12 to 15 men dismounted their horses on the north side of the Kings River. The gang quietly walked across the bridge that had replaced the ferry, and entered town. A gang member stood guard outside of each business, and other gang members entered the buildings with pre-cut pieces of rope, bound the occupants and stripped them of their valuables.

Ed Douglas, a Visalian staying at the hotel, did not cooperate with the bandits and paid the price. He was pistol whipped and robbed of his watch and money. Within a short time, the streets were deserted and all the men were under siege. With loot in hand, the gang crossed back over the bridge to their waiting horses, but not before several Kingston citizens began shooting at the fleeing bandits. The gang escaped and according to some reports, two of them were wounded.

No one lost their life in the bold attack, and only a few victims were injured. In all, 35 men had been robbed and a total of $2,500 worth of property had been taken. The takeover of the town was quickly and widely reported and it became known as the "raid on Kingston." (Kingston no longer exists, but the town and the bold crime are memorialized with a marker near the town of Laton.)

The people of California were nervous over the incident, especially Visalians who lived just a few miles from the little town. On January 4, 1874, just 10 days later, some citizens of Visalia observed suspicious men enter the town and go to the residence of a widow who was bound and robbed of her money. Citizens sounded the alarm yelling "robbers," and armed Visalians headed for the victim's house to confront the men. When the armed force arrived, the outlaws were gone, but they found 60 pieces of pre-cut rope left behind, presumably for use in securing more victims, just like in Kingston.

The robbers evaded the pursuing citizens of Visalia, but the residents were pleased they had foiled this Kingston-like raid. Were the Visalia robbers part of the Tiburcio Vasquez gang or copycat thieves? Quien sabe? (Who knows?)

Local writer Terry Ommen enjoys learning about the old west, especially the role Tulare County played in creating it. He wrote the books "Then & Now Visalia, Wild Tulare County" and "Christ Lutheran Church, A Gathering Place for Half a Century." His blog, "Historic Happenings", posted at http://www.visaliahistory.blogspot.com serves as a Visalia historical newsletter.