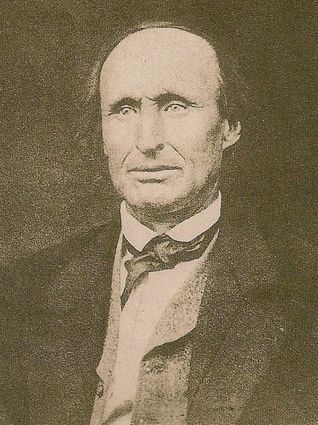 Thomas Baker, the man who did his part to make Visalia the Tulare County seat.

The Tulare County election of 1853 marked the beginning of the end for the tiny settlement of Woodsville. When Tulare County was formed from the southern section of Mariposa County in 1852, Woodsville became the first county seat. Its position as the county capital was short lived, however, and Woodsville's misfortune became a blessing to Visalia. How the transfer of power happened is interesting, especially if early county settler Richard Chatten's version of the event is accepted as factual.

The county election of 1853 offered the normal array of office seekers, but the big issue to be decided was the location of the county seat. The honor of being the seat of government meant prosperity, so Woodsville was anxious to retain its status and the new settlement of Visalia was interested in taking over.

As the county had only 24 voters, most settlers knew each other and as a result, they knew how everyone felt on the county seat question. It was clear by initial polling that voting was going to be close. Thomas Baker, a candidate for county judge, was pushing hard for the Visalia site, while John Cutler, also a candidate for judge, lobbied strongly for Woodsville.

Baker formulated a plan. He approached Dick Chatten and said, "Dick, we need another man to carry Visalia as county seat. Do you think you can find him?" Chatten said he would try.

Chatten took to the hills east of Visalia and there he found a hunter named Bryson. The mountain man had regularly gone to Visalia to buy tobacco, so Chatten thought he might be the voter that could push Visalia over the top.

To woo him over, Bryson was offered an all expense paid vacation in Visalia right before the election. He was wined and dined and soon he was convinced that Visalia was the best location for the county seat.

Election day came and the voters turned out in expected numbers. Not surprisingly, sometime around midday, the vote tally revealed an even split on the county seat question. But Bryson hadn't voted yet. He was the last voter of the day. He approached the polling location and was immediately challenged by a Woodsville advocate. "Do you live in Tulare County, Mr. Bryson?" he was asked. "I don't know," he replied. "Where do you live?" the questioner continued. "Sometimes I live on one side of Dry Creek, sometimes I live on the other and my house is generally under an oak tree," answered Bryson.

He satisfied the questioner and Bryson was able to cast his vote. Thanks to the man from the mountains, Visalia received one more vote than Woodsville. Visalia became the county seat of Tulare County and has been ever since.

Baker's strategy worked for Visalia, but it did not work for him personally. John Cutler was elected county judge, however, Baker would continue to be an important figure in the new county seat. He later moved south and founded the town of Bakersfield.