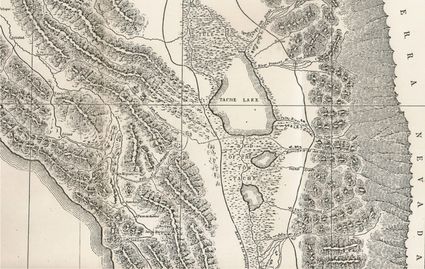 A portion of the 1850 map that Derby drew. On the lower left is both San Luis Obispo and Paso de Robles. On the right side you will see the River Francis and you will see 5 waterways that form there. In the midst of those 5 waterways is now the City of Visalia.

George Horatio Derby was a brilliant man whose short 38 years of life was packed with adventure and accomplishment. During his life, this West Point graduate was a newspaper journalist, topographical engineer, practical joker and humorist some say on par with Mark Twain. Very little of his life had any connection with Tulare and Kings counties, but for two months he explored our area. Fortunately for us, his military mission gave us a glimpse of our region just prior to California's statehood in September 1850.

Derby was born in Massachusetts in 1823 and by 1846 he had graduated from West Point, ranking a respectable seventh in his class. After graduation the young officer was sent south of the border to help fight in this country's war with Mexico. Wounded by a gunshot, Derby was sent back to the states to work in a topographical unit. He was a quick study and learned topographical engineering very well. In 1849 he was ordered to California, and a year later he was selected to lead an expedition into the Tulare Valley (now called the San Joaquin Valley.)

His assignment was clear. He was to find good routes of travel between the central coast area and the Tulare Valley, and identify suitable locations in the valley for a military post. A military fort, it was believed, was necessary for "protection of the frontier from Indian incursions."

Lt. Derby and his survey party left Monterey on April 10, 1850, and travelled south to the Paso Robles and San Luis Obispo areas. From there they headed east. On about May 1, they entered the Tulare Valley and reached the western shore of Tache [Tulare] Lake.

Derby reported that while at the lake he could distinguish timber at the north end and "tule" at the south end. The snow on the peaks of the Sierra Nevada appeared so close it looked like it was at the shoreline of the lake. The survey party noted that the land surrounding the lake generally looked like a desert with "no forage for the animals...and no wood."

The men traveled south around the lake shore, then north up the eastern side of the great valley. On May 14, they arrived at the River Francis, now known as the Kaweah River. Derby described it as a "large stream...divided into five branches or sloughs, four of which separate from the main river." He was describing an area known as "Four Creeks" and further noted, "the country, eight miles in length by six miles in width, contained between these branches, is a beautiful smooth level plain, covered with clover of different kinds and high grass, and thickly shaded by one continuous grove of oaks of a larger and finer description than any I have seen in the country."

The explorers found the local native people helpful as well. Derby wrote, "We would have found it difficult to cross [swollen creeks] had it not been for the kind assistance of the neighboring Indians." The men continued north to the Kings and San Joaquin rivers. 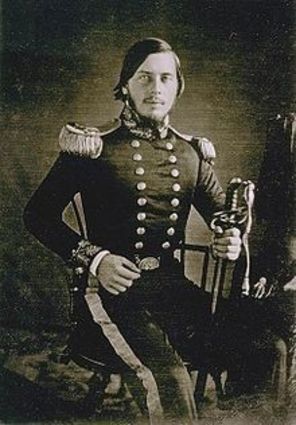 The party returned to Monterey on June 8, 1850, and Lt. Derby submitted his report. In it he concluded, "The only point in the whole valley which struck me as at all suitable for a military post, was the portion of interval land contained by the five creeks of the River Francis."

An army military post was never built in the Tulare Valley. Two years after Derby explored the region, Tulare County was created, and 41 years after that Kings County was formed from the western part of Tulare County. George Derby died in 1861 at the age of 38.

Local writer Terry Ommen enjoys learning about the old west, especially the role Tulare County played in creating it. He wrote the books "Then & Now Visalia, Wild Tulare County" and "Christ Lutheran Church, A Gathering Place for Half a Century." His blog, "Historic Happenings" http://www.visaliahistory.blogspot.com