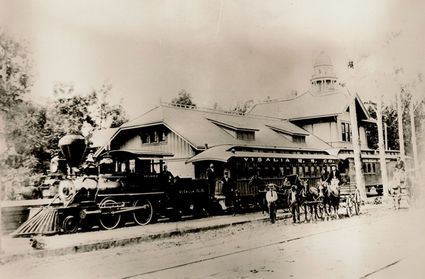 The Visalia-Goshen Railroad connected Visalia with the main railroad line. This photo, taken in 1895, shows the depot at the corner of Church and Oak streets.

Long before the golden spike was driven at Promontory, Utah in 1869, the people of Tulare County had their eyes on railroad transportation. Compared to buggies, iron horses offered easy travel, and compared to wagons, trains made hauling crops to market much quicker and more efficient. Trains meant travel convenience and economic prosperity to communities.

The first serious effort in Tulare County to get railroad transportation seems to have been in 1861. A meeting of prominent citizens was held at the Tulare County Courthouse in Visalia and eventually the Board of Supervisors got involved. Routes were discussed and soon talks were started with Central Pacific Railroad officials.

By the late 1860's, railroad surveyors were mapping out possible routes through the San Joaquin Valley. The plan was for the Valley railroad to be a joint effort between the Southern Pacific and the Central Pacific railroads. The SP would be responsible for laying track from the south to the north, and the CP would lay track from north to the south. Eventually, the two railroad crews would come together and connect the tracks in the central part of Tulare County.

As the exact route became known, it was clear that Visalia was not included. Railroad officials had worked out the finances, and to the disappointment of Visalians, they planned to bypass the Tulare County seat.

By 1870, track was being laid. By mid-1871 the Central Pacific coming from the north had completed track to what is now Modesto, and a few months later they reached what is now Merced. The Southern Pacific was making similar progress laying track from the south. The pace was quick with about 2,000 workers laying about a mile of track per day.

As the crews got closer to Tulare County, Visalia believed it had one more chance to get the railroad to pass through town. A delegation of locals went to Sacramento to meet with railroad officials and they made one final plea asking for reconsideration. The delegation returned to Visalia without any railroad concession.

In the spring of 1872, the railroad town of Fresno was created along the new line. By summer, the rails reached Tulare County and soon the town of Tulare was created. In June, 1872 the disappointing reality hit home for Visalia. About seven miles west of town, the railroad created Goshen. Visalia's worst fears had come true; the railroad had bypassed the town.

Although Visalians were disappointed, Tulareans were excited. The railroad had big plans for their new town. In fact, Tulare became division headquarters with a major terminal with machine shops and a multi-stall roundhouse. For two decades, the town prospered. Its future looked bright, but in 1891 the railroad moved its shops and headquarters to Bakersfield.

Even though Visalia had been cut off from the railroad, community leaders moved quickly to find a solution. In May of 1874, the Visalia-Goshen Railroad was formed creating a connection between Visalia and the main line in Goshen. The Visalia Railroad operated until 1897 when the Southern Pacific bought the line. Finally, Visalia got its wish and the SP rolled into town.