The Emergence of Kings County 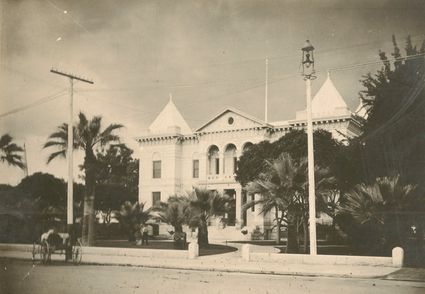 In 1852, nearly 25,000 square miles of land on the south end of Mariposa County was carved off creating Tulare County. The new county's boundaries stretched from the Los Angeles County line on the south, to the Mariposa line on the north. Its western edge was the coast range and on the east, the county line extended to what we now know as the Nevada state line.

But the huge new county, about the size of West Virginia, was not destined to remain so for long. In 1856, the northern section broke off forming Fresno County and in 1866 Kern and Inyo counties were created from the southern and eastern sections, respectively. For the next 27 years, Tulare County's boundaries remained intact, but in 1893 Tulare County gave birth to yet another county-this one called Kings.

The beginning of the movement to create Kings County started in 1886, but the bill failed in the state legislature. By the 1890s, west side settlers were again grumbling about the inconvenience of Visalia as the county seat. They claimed it was too far to travel for the people living in and around Hanford where the majority lived. They also complained that Tulare County taxes were too high and noted that many tax dollars were going to areas like the mountains that had little connection to them.

Opponents of a new county, primarily those from the Visalia area, countered by saying Visalia was actually centrally located and the tax money used for mountain area services also benefited the western county settlers by providing lumber, mineral resources and pasture land.

Lobbying on both sides was heavy. The Hanford Sentinel advocated strongly for the new county while the Visalia newspapers staunchly opposed it. Surprisingly, the Lemoore Leader opposed the creation of the new county unless, of course, the city of Lemoore could become the county seat. The Visalia Delta expressed obvious frustration over the constant editorial bickering and asked for honest dialogue.

"People are always ready to listen to reason; but the nauseating medicines now being administered in gigantopathic doses make a patient and wearied public wish it had died when a baby," they lamented.

Advocates for the new county kept up the pressure and in March 1893, the state senate passed the Kings County bill. California Governor Henry Markham signed it, moving the final decision closer to a vote of the people. The Visalia Delta saw the momentum.

"Kings County contains some of the best agricultural land in the San Joaquin Valley and with an enterprising population...it will prosper," it reported it reported on March 24.

Governor Markham appointed five local commissioners who divided the proposed new county into supervisorial districts, set up voting precincts, and organized an election to allow the issue to go to the voters.

On May 23, 1893, the west side people went to the polls. After the votes were tallied the Visalia Delta announced the news, "Division Wins-the County of Kings Created by the Electors."

A view of Hanford's Front Street about 1892.

The total vote count was 1,355 for division and 412 against giving the new county supporters more than the two-thirds majority they needed.

Today, Kings County is the 34th largest county with nearly 1,400 square miles. Even after losing ground on the north, south, east and west, Tulare County continues to have more than 4,800 square miles of land, and is the 7th largest in the state.