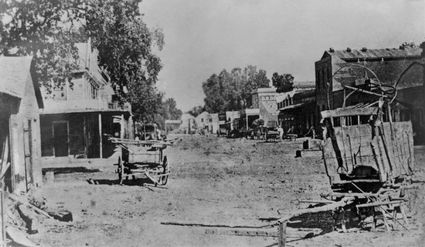 Visalia's Main Street looking east from Court St. taken in 1863, about five years after the inaugural stage trip. To the left, behind the parked (abandoned) wagon, is where the Butterfield Stage would have stopped five years earlier.

In 1850, when California became the 31st state in the union, it was isolated and far from the population centers to the east. Mail service was slow, and the steamships delivering precious cargo weren't always reliable. California was important to the country, so Washington was anxious to solve the problem. The federal government contracted with John Butterfield, the well-known entrepreneur and transportation pioneer, to operate what became the longest stagecoach mail line in world history. The route started in Tipton, Missouri, a small town west of St. Louis, and from there it made a 2,800 mile U-shaped swing through Texas and ended in San Francisco.

The first stagecoach of Butterfield's Overland Mail Company left Tipton on September 16, 1858, carrying two bags of mail and a New York newspaper reporter, Waterman Ormsby. The line offered passenger service so Ormsby wanted to travel the entire length of the route and record his journey for the New York Herald.

For the first leg, traveling was easy using existing roads, but after they left Fort Smith, Arkansas, the going got more difficult. Many sections had no clearly defined path, so the horse-drawn vehicle had to create its own as it rolled over hills, washouts, and through soft sand. Travel was fast but essential in order to meet strict delivery requirements.

When the route was laid out, 141 way stations, fairly evenly spaced, were established providing opportunities for fresh teams and drivers, food and some rest. The terrain was tough and Ormsby tried to sleep, but adjusting to the continuous jerking, jolting and bouncing made it difficult. The dust, poor food and lack of fresh water added to the discomfort.

Their route went through Texas, New Mexico Territory and finally into California entering at Fort Yuma. From there it went to Los Angeles and north to Fort Tejon. Then it dropped into the San Joaquin Valley skirting the Sierra foothills on its way north. The first stage stop in what is now Tulare County was Fountain Spring, followed by Tule River (Porterville), then Packwood Station about 12 miles southeast of Visalia.

At about 11 p.m. on October 8, 1858, after over three weeks on the road, Ormsby's stage pulled into Visalia. He was impressed with the hospitality of the welcoming crowd, and he especially appreciated the glass of beer he was given. Less than an hour later as the coach was leaving town, Visalians gave the stage an anvil salute-a loud and celebratory send off reserved for special occasions. Ormsby wrote about his stop in Visalia, "This is the first evidence of any enthusiasm along the route since we left Fort Smith, and the rousing cheers they gave us as we drove off...ought to be remembered in the history of the town, so I hereby immortalize them."

From Visalia the route went to Cross Creek Station, then Whitmore's Ferry on the Kings River, both in what became Kings County. After stops in Fresno County, the coach climbed over the Pacheco Pass into Gilroy.

At 7:30 a.m. on October 10, 1858, 23 days and about 23 hours after leaving Tipton, Missouri, the Butterfield stage arrived in San Francisco. Despite his hardship, Ormsby praised the route predicting its future success. Butterfield had met his contractual commitment and Ormsby became the first person ever to cross the plains in less than 50 days.

In 1861 Civil War concerns including secessionist violence, made the route too dangerous to travel and the southern route of the Overland Mail Company was abandoned forever.

Local writer Terry Ommen enjoys learning about the old west, especially the role Tulare County played in creating it. He wrote the books "Then & Now Visalia, Wild Tulare County" and "Christ Lutheran Church, A Gathering Place for a Half Century." His blog, "Historic Happenings" http://www.visaliahistory.blogspot.com serves as a Visalia historical newsletter.