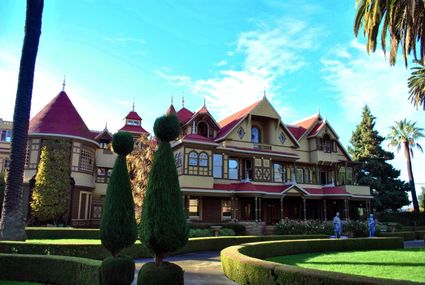 Looking for an interesting day trip, one that even some older grandchildren would enjoy? Consider heading north to the Winchester Mystery House, located less than 200 miles away in San Jose.

It is easy to imagine how the combined grief of losing both a child and a spouse could be very crippling. But if you had $20,000,000 and all the time in the world to help you cope, can you imagine what you would do? Sarah L. Winchester's response to the deaths of her child and husband left a bizarre and impressive architectural reflection of her psyche. The fascinating story of the Winchester Mystery House has its roots in the personal tragedies suffered by Mrs. Winchester and in the legacy of the Winchester rifle.

In 1862, Sarah married William Wirt Winchester, son of Oliver Fisher Winchester, Lieutenant Governor of Connecticut and manufacturer of the famous Winchester repeating rifle. The couple's life together was happy, and they moved in the best New England society. However, in 1866, disaster struck when their infant daughter, Annie, died of then mysterious childhood disease marasmus. Mrs. Winchester fell into a deep depression from which she never fully recovered. Fifteen years later, in March 1881, her husband's premature death from tuberculosis added to Mrs. Winchester's distress. It is said she ultimately sought help from a spiritualist.

According to some sources, the Boston Medium consulted by Mrs. Winchester explained that her family and her fortune were being haunted by spirits – in fact, by the spirits of American Indians, Civil War soldiers, and others killed by Winchester rifles. Supposedly the untimely deaths of her daughter and husband were caused by these spirits, and it was implied that Mrs. Winchester might be the next victim.

However, the medium also claimed that there was an alternative. Mrs. Winchester was instructed to move west and appease the spirits by building a great house for them. As long as construction of the house never ceased, Mrs. Winchester could rest assured that her life was not in danger. Building such a house was even supposed to bring her eternal life.

Whatever her actual motivations, Mrs. Winchester packed her bags and left Connecticut to visit a niece who lived in Menlo Park, California. While there she discovered the perfect spot for her new home in the Santa Clara Valley. In 1884 she purchased an unfinished farm house just three miles west of San Jose - and over the next thirty-eight years she produced the sprawling complex we know today as the Winchester Mystery House.

There are a number of different tours available of the estate beginning at 9 each morning except on Christmas. Depending on the tour, rates are $27-$40 for adults, $26-$36 for ages 65+, and $24-$30 for children ages 6-12. The Grand Tour lasts 2 hours, while the Behind The Scenes Tours lasts 45 minutes. Some tours are not wheelchair or stroller accessible, so be sure to call ahead to ask. There is even a Special Flashlight Tour offered every Friday 13th and on October 17, 18, 23 – 26, and 30 and 31. These tours also enjoy extra entertainment on the estate from magicians, to balloon artists, to caricature illustrators. Following Halloween, a Spirit of Christmas Tour features trees decorated with handmade ornaments collected from around the world.

Mrs. Winchester's financial resources were virtually unlimited; upon her husband's death she received several million dollars in cash and 777 shares of stock in the Winchester Repeating Arms Company. Upon her mother-in-law's death in 1897, Mrs. Winchester received 2,000 more shares, which meant she owned just under fifty percent of the company's capital stock. This provided her with an income of $1,000 a day – back in the days before income taxes.

Mrs. Winchester's interest in seclusion was evident from the start. One of the first tasks of the gardeners was to plant a tall cypress hedge surrounding the house. She reportedly kept her face covered with a dark veil at all times, and there are stories of her firing servants who caught a glimpse of her face by accident.

Then there were occurrences that defied explanation. Neighbors would hear a bell ring at midnight and 2 a.m., which according to ghost lore are the times for the arrival and departure of spirits. Some said that Mrs. Winchester never slept in the same bedroom two nights in a row, in order to confuse any evil spirits that might be waiting for her. At the very center of the house is the Blue Room, where Mrs. Winchester supposedly would go every night to commune with the spirits.

At the time of her death, the unrelenting construction had rambled over six acres. The Sprawling mansion contained 160 rooms, 2,000 doors, 10,000 windows, 47 stairways, 47 fireplaces, 13 bathrooms, and 6 kitchens. Carpenters even left nails half driven when they learned of Mrs. Winchester's death.

According to the provisions of her will, Mrs. Winchester's personal property, including the furnishings, household goods, pictures, jewelry, and papers were left to her niece, Mrs. Marian Merriman Marriott, who promptly had the furnishings auctioned off. It is said to have required six trucks working six weeks to cart the furnishings away. The mansion and farm were not mentioned specifically in the will. They became part of Mrs. Winchester's estate and were sold by her trustees, the Union Trust Company of San Francisco.

What was Mrs. Winchester's true motivation for devoting the second half of her life to building what is now known as the Winchester Mystery House? No one can say with complete certainty, for no one ever interviewed her and she left not a single journal. Since Mrs. Winchester's death, hundreds of wild stories have appeared about this mysterious woman and the sprawling mansion that bears her name. It seems odd that none of her relatives or former employees ever came forward to contradict these stories, despite that fact that some of them lived more than forty years after Mrs. Winchester's death.

The Winchester Mystery House makes a fascinating day trip for anyone interested in history as well as mystery.