Spring is the Time for a Visit to Death Valley 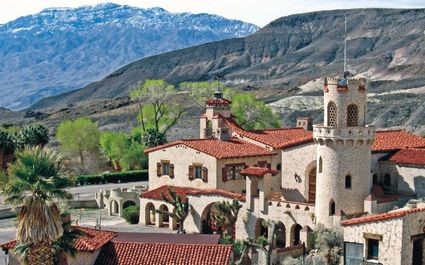 Just a five hour drive by car, a bit longer by recreational vehicle, is an area rich with the history of Westward bound migration and geology. The prime time to visit Death Valley National Park is the spring, as it becomes quite hot as early as April. It is a good springtime vacation spot for many reasons including history, nature and relaxation.

Declared a National Monument in 1933, Death Valley became a National Park in 1994. It contains the lowest elevation point in the United States at 282 feet below sea level in Badwater Basin, while its highest peaks, within the Panamint Mountains, reach more than 10,000 feet above.

Do not let its morbid name fool you. It got the name from a group of pioneers who spent the winter lost there in 1849-50, while making their way to the West Coast. One group member did die there, and others were afraid their fate would be the same, as they were unsure how to get out of the Valley. However the following spring they did and upon climbing over the Panamint Mountains, one gentleman was believed to have turned back to say "Goodbye Death Valley," and thus it got its name.

It is a good spot for vacations lasting a few days or longer, as there is much to see and do, according to Cheryl Chipman, public information officer for the park.

If you want to stay at Furnace Creek Lodge or a nearby inn or lodge, Chipman said reservations should be made early. Reservations are available for only one campground in the park, while all others are on a first come, first serve basis. Many fill up during springtime, especially on weekends or during spring break for schools. However, the Sunset Campground, which is great for recreational vehicles, usually does have space available, Chipman said.

Death Valley is the largest National Park in the contiguous 48-states, with a lot to do there. Chipman said some of the "must sees" from a geological aspect are located along Bad Water Road. The Devil's Golf Course has large salt formations that have been transformed by wind and rain into jagged columns. Artist's Drive has spectacular views with up to eight different colors within the rock formations. The Natural Bridge, as the name implies, is a natural formation across a canyon and can be seen with a short, one-mile walk on an easy trail off the road. When continuing along Highway 190, the Badlands can be viewed from Zabriskie Point.

"With warmer temperatures and longer days there is a possibility for spring blooms," Chipman said. "It can be quite spectacular and turn a gravelly desert into a carpet of flowers." But this varies year to year depending upon the weather and amount of moisture.

There is still more to see, including Scotty's Castle. Walter Scott, also known as Death Valley Scotty, did not actually live in the castle, but rather at a ranch house nearby. He is the most well-known figure of history from the area.

A roughrider during the 1890s, he spent much of his time working odd jobs in the Valley, and also conned many men to invest in a gold mine which did not produce. Not phasing him, Scotty kept turning up in saloons and hotels for the wealthy, and eventually landed an investor in Albert Mussey Johnson, an insurance man from Chicago. While the mine never showed any profit, Johnson decided to visit the area and fell in love with it. He bought property, built the castle and the ranch house for Scotty, whom had become his good friend.

The castle has tours daily, as does the ranch house periodically. Other guided tours are available through the National Park Service including paleontology, Native American history, geology and bird watching. There is also the privately owned Borax Museum in the Furnace Creek Ranch area.

If you have limited time it is best to reserve tours ahead of time, Chipman said. But at least for castle tours, there are multiple departures every day.

Some important things to pack for your trip according to Chipman include a variety of clothing, as the weather frequently changes in the spring and can be quite different at various altitudes. Always have bottled water on hand, as well as a snack of some kind. It is also important to be aware of the amount of gas in your tank and the locations of filling stations.

Chipman has worked in Death Valley for more than three years and continues to enjoy her work and adventure.