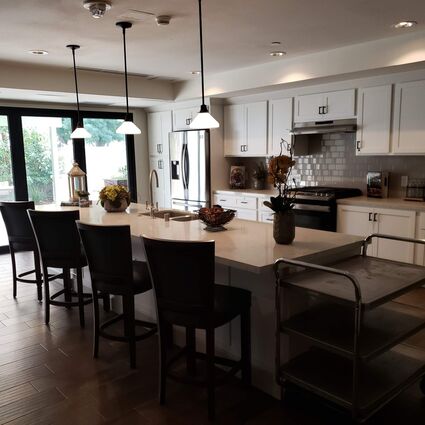 While the rest of the world battled COVID-19, Town Meadows was more than lobby deep in a massive renovation project at the senior residential apartment complex in downtown Visalia.

Today, with just a few tweaks remaining, the over-$7 million project catapults the multi-story building past what many would think of when it comes to low income residential housing.

"I think it's very nice. The common areas are beautiful," said Betty Giles, an 89-year-old who has lived at Town Meadows several times since originally moving there in 2000. "We have a beautiful kitchen. In the lobby, we have a beautiful couch and chairs. It's very, very nice."

The facility, purchased by Thomas Safron & Associates in August 2018, wasn't easy to transform during the COVID pandemic.

"It (COVID) was more of a hindrance to the project." said Lori Trowbridge, who manages the 100-apartment, nine-story facility. "Some of the construction employees didn't want to risk coming to work, especially at a senior residential facility,"

Town Meadows is a low income housing complex for those ages 62 or over, which receives subsidies from the U.S. Department of Housing and Urban Development that offset the cost of rent. Eligible residents pay 30% of their monthly income toward their rent, with all utilities included. But while low income housing might conjure images of spartan furnishings and 1960's decor, the remodel that began in the fall of 2019 did far more than paint a few walls and spruce up some pillows.

A new kitchen and computer lab were created. Where there were once storage rooms is now a beautiful lounge area with a massive TV and inviting couches. Outside the building new landscaping was installed, including a planting bed for vegetables and a renovated barbecue area. Where there was once an awning outside the front entrance is now a massive pergola, including the facility's name and signature Thomas Safran & Associates clock.

A fully redecorated lobby greets residents and visitors upon entrance, and each apartment in the building was remodeled while the occupants were temporarily relocated to a nearby hotel, all at the new owner's expense.

Despite the cost of the project, residents' rent was not affected. But what was affected due to COVID was the normally long waiting list, which has dwindled. Prospective residents weren't allowed to tour the facility due to the shutdown caused by the pandemic, and what was once more than a year's wait to get an apartment after meeting qualifications has diminished. 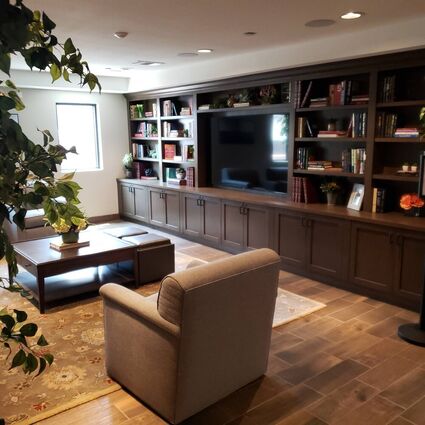 "The motivation and inspiration to renovate Town Meadows was to bring to life and beautify the already existing property that we had recently acquired," said Jordan Pynes, president of Thomas Safran & Associates. "The residents were already living in the community, and we recognized an opportunity to enhance the building."

The corporation has developed over 6,000 units of luxury, affordable and mixed-use rental housing in Southern California over the past 40 years, and said in a press release, "We are committed to providing superior design, maintaining our properties to the highest standards and enriching the lives of the people who reside in our buildings." While most of the corporation's properties are in Southern California, two are in Fresno.