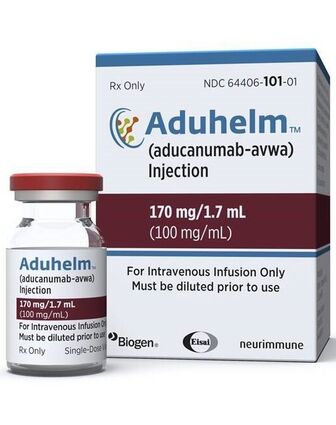 On June 7, the FDA approved Aduhelm (the brand name for aducanumab) to treat patients with Alzheimer's disease using the "accelerated approval" pathway, which allows the FDA to approve a drug for a serious or life-threatening illness when the drug is reasonably likely to have a clinical benefit to patients, but when there remains some uncertainty.

Aduhelm is the first new therapy approved for Alzheimer's disease since 2003. The drug is the first treatment directed at the underlying pathophysiology of the disease, the presence of amyloid beta plaques in the brain.

"We are well-aware of the attention surrounding this approval," said Dr. Patrizia Cavazzoni, director of the FDA Center for Drug Evaluation and Research. "We understand that Aduhelm has garnered the attention of the press, the Alzheimer's patient community, our elected officials and other interested stakeholders. With a treatment for a serious, life-threatening disease in the balance, it makes sense that so many people were following the outcome of this review."

She noted that the data included in the applicant's submission "were highly complex and left residual uncertainties regarding clinical benefit."

"There has been considerable public debate on whether Aduhelm should be approved," Cavazzoni conceded. "As is often the case when it comes to interpreting scientific data, the expert community has offered differing perspectives.

"At the end of the day, we followed our usual course of action when making regulatory decisions in situations where the data are not straightforward," she continued. "We examined the clinical trial findings with a fine-tooth comb, we solicited input from the Peripheral and Central Nervous System Drugs Advisory Committee, we listened to the perspectives of the patient community and we reviewed all relevant data.

"We ultimately decided to use the Accelerated Approval pathway - a pathway intended to provide earlier access to potentially valuable therapies for patients with serious diseases where there is an unmet need, and where there is an expectation of clinical benefit despite some residual uncertainty regarding that benefit."

"This approval is a victory for people living with Alzheimer's and their families," said Harry Johns, Alzheimer's Association president and chief executive officer. "This is the first FDA-approved drug that delays decline due to Alzheimer's disease. This means individuals may have more time to actively participate in daily life, have sustained independence and hold on to memories longer. We can experience longer - the relationships we hold most dear - our families and friends."

"This FDA drug approval ushers in a new era in Alzheimer's treatment and research," said Maria C. Carrillo, Ph.D., Alzheimer's Association chief science officer. "History has shown us that approvals of the first drug in a new category invigorates the field, increases investments in new treatments and encourages greater innovation. We are hopeful and this is the beginning - both for this drug and for better treatments for Alzheimer's."

This enthusiasm was shared by the leadership of the Alzheimer's Association's California Southland Chapter, which includes the South Valley.

"This is a new type of Alzheimer's treatment, and it addresses the disease in a way that has never been done before, compared to currently approved drugs," said Meg Barron the chapter's regional leader and executive director. "It is the first approved therapy of this type; it demonstrates that removing amyloid from the brain may delay clinical decline in people living with Alzheimer's."

"This treatment is the first Alzheimer's drug to target the amyloid plaques in the brain thought to causes Alzheimer's Disease," said Dr. Karen Haught, public health officer for Tulare County. "The Accelerated Approval Program allowed approval of the treatment based on the reduction of amyloid plaque rather than requiring the clinical trials to show clear clinical improvement or slowing of the progression of the disease.

"This approval pathway has been used for treatments for life threatening conditions when there is not currently an alternative treatment option," she continued. "After the approval, the FDA is requiring additional clinical trials to establish whether or not there is clinical improvement or slowing of disease progression associated with the reduction in amyloid plaque.

"We look forward to the findings of these additional trials. We all hope for an effective treatment to help our loved ones and their families affected by Alzheimer's Disease."

Dr. Milton Teske, health officer for the Kings County Department of Public Health, offered a different opinion on the FDA's decision. He noted that aducanumab was not recommended by the review committee.

"There are 11 members on the committee and 10 voted not to approve," he said, adding that the FDA is not bound to accept the committee's recommendation.

"I wouldn't rush out to use it," said Dr. Teske, who believes that the FDA acted "prematurely" in approving the drug.

"There's a number of drugs that dissolve plaques but none have been shown to improve patients," he said. "There are a lot of unknowns. They have to do more research on it."

Teske believes that a better approach to fighting Alzheimer's would be one that addresses how people live their lives.

"Alzheimer's is primarily dietary and lifestyle-driven," he said, disagreeing with those who "think you're going to find one drug that will cure Alzheimer's. If you want to cure the disease, you have to eliminate the cause."

Their books, such as The 30-Day Alzheimer's Solution: The Definitive Food and Lifestyle Guide to Preventing Cognitive Decline and The Alzheimer's Solution: A Breakthrough Pro-gram to Prevent and Reverse the Symptoms of Cognitive Decline at Every Age, present the argument that lifestyle choices are the best defense available in fighting cognitive disease.

The FDA will continue to monitor Aduhelm as it reaches the market and ultimately the patient's bedside. Additionally, FDA is requiring Biogen, the manufacturer of aducanumab, to conduct a post-approval clinical trial to verify the drug's clinical benefit.

"If the drug does not work as intended, we can take steps to remove it from the market," said Cavazzoni. "But hopefully, we will see further evidence of benefit in the clinical trial and as greater numbers of people receive Aduhelm. As an agency, we will also continue to work to foster drug development for this catastrophic disease."