Seniors in Ukraine Most Impacted by Russian Invasion 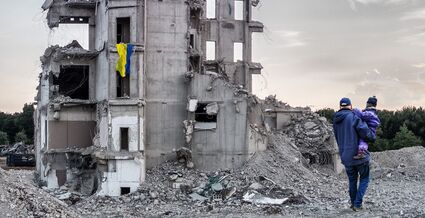 Older people in Ukraine have been disproportionately impacted by death and injury during Russia's invasion and are unable to access housing on an equal basis with others after being displaced, Amnesty International said in a new report.

The report, I Used to Have a Home: Older People's Experience of War, Displacement, and Access to Housing in Ukraine, documents how older people often remain in or are unable to flee conflict-affected areas, exposing them to harmful and dangerous living conditions in severely damaged housing.

Those who do flee often cannot afford to cover rental costs, while thousands have had to stay in overstretched state institutions, which do not have enough staff to provide the necessary level of care.

Russia's invasion of Ukraine, which has had a devastating impact on civilians of all ages, threatens the physical security of older people and has forced millions from their homes. Ultimately, the most expedient way to protect the rights of older civilians in Ukraine is for Russia to end its unlawful war.

"Russia's devastating invasion is having a disproportionate impact on older people in Ukraine, with many staying behind in areas where they regularly come in harm's way from relentless ground and air attacks." said Laura Mills, a researcher on older people and people with disabilities at Amnesty International.

"Older people are often either staying in unsafe homes or, when they are able to flee, end up in shelters that do not have adequate resources to meet their needs, particularly if they have disabilities. From there, they risk being placed in state institutions. As the harsh grip of winter takes hold, the international community must urgently take action to bolster support for this group."

The Ukrainian government has made significant efforts to evacuate people from conflict-affected areas, including by announcing the mandatory evacuation of around 200,000 people from the Donetsk region in July.

The cost and logistics of ensuring housing for older people displaced by the war, however, should not be Ukraine's alone. Amnesty International is calling on other countries to facilitate the evacuation of older people - with special attention paid to older people with disabilities - to accessible accommodation abroad where possible.

In Ukraine, people over 60 years old comprise nearly one-fourth of the population. Older people are disproportionately vulnerable to attacks. According to the UN Office of the High Commissioner for Human Rights, which collects data on civilian casualties in Ukraine, people over 60 made up 34% of civilians killed from February to September 2022 for cases in which age was recorded.

Older people, who more frequently have health conditions, are also at greater risk in occupied areas, where Russian forces have severely restricted access to humanitarian aid, in flagrant violation of international law.

Many displaced older people have struggled to find suitable accommodation. Pushed out of the private market by increased rental prices and pensions that are well below subsistence levels, many older people are at heightened risk of losing access to housing altogether.

Amnesty International found that shelters were often physically inaccessible to older people with disabilities and did not have enough staff to support them.

As a result, older people with disabilities often had no choice but to live in a state institution. Between February and July 2022 alone, at least 4,000 older people were placed in state institutions after losing their homes during the conflict, according to statements released by Ukraine's Ministry of Social Policy.