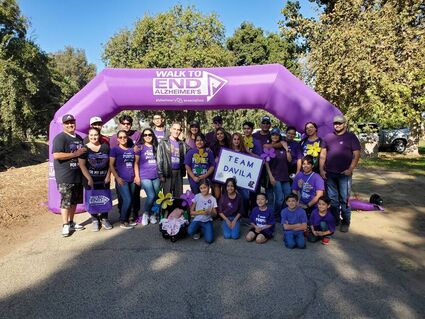 Team Davila was one of the teams participating in the walk, raising $798.

About 150 area residents participated in this year's Tulare & Kings Walk to End Alzheimer's at Mooney Grove Park in Visalia on October 1st. Approximately $25,000 was raised to fight the disease.

"I think it went very well," said Sherrie Wallace, event chair. "The event was smaller than previous years but there was a sense of unity this year."

Wallace believes that last year's numbers were influenced by the fact that the pandemic was not as much a factor as it had been the year before. Last year, people were excited about getting back out in public again.

This year, inflation and gas prices were a factor, according to Wallace, "especially since we cover two counties. I think that prevents participation." 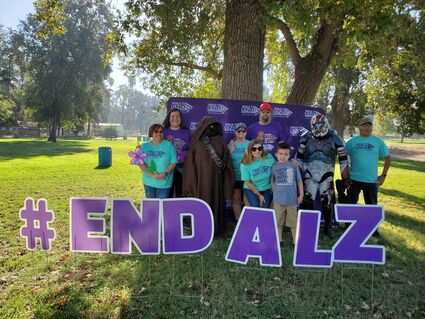 There were participants from Kings County, however, including few from Hanford who attended the event in costume.

"They showed up as Star Wars characters, which was very unexpected," said Wallace. "I'm a big Star Wars fan, so this was a big surprise. I'm hoping to get in communication with them so they can bring out more characters next year." she added.

The Alzheimer's Association Walk to End Alzheimer's is the world's largest event to raise awareness and funds for Alzheimer's care, support and research. More than six million Americans are living with Alzheimer's disease, making it the sixth-leading cause of death in the U.S.

Donations for this year's Tulare-Kings Walk to End Alzheimer's can be made to: The Alzheimer's Association, 1401 Commercial Way, Suite 210, Bakersfield, CA 93309. Donations received by December 31 will be credited to the 2021 Walk.