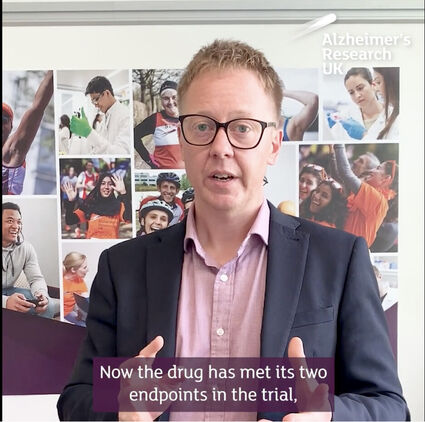 Tim Parry, director at Alzheimer's Research UK, gives his reaction to the news on this historic day for dementia research on YouTube.

The following article was posted at https://www.AlzheimersResearchUK.org on September 22. We are sharing the post with only minor edits so we don't lose any of the enthusiasm of the anonymous writer.

It's news we've all been waiting for. Today, the pharmaceutical company Eisai announced that their drug Lecanemab has shown small but clear benefits for people with early Alzheimer's in a rigorous, well-conducted phase 3 trial.

The drug is one of several in development that work by removing a protein called amyloid from the brain, but it's the first that's been shown to slow down patients' decline in memory and thinking, and improve day-to-day activities. And although the effects are modest, with the potential for some significant side effects, this nonetheless heralds a new era – the arrival of a treatment that is proven to slow the course of Alzheimer's disease.

It is, truly, a historic moment for dementia research. And it's a vindication of what we at Alzheimer's Research UK have long believed: that scientific research on dementia and the diseases that cause it will lead to effective treatments.

And yet, as ever there are caveats. As UK experts remarked to the media this morning, while this is the "end of the beginning" of the search for effective treatments, there are many hurdles ahead that need to be cleared before the drug can be made available to people here.

A Vital Step Forward – But Not a Cure

The trial, known as CLARITY AD, involved 1,795 people with either mild Alzheimer's or mild cognitive impairment (MCI) due to Alzheimer's, who received an intravenous infusion of either Lecanemab or a dummy drug (placebo), every two weeks. They then had brain scans, and a regular interview-based test called CDR-SB, which measures things like memory, orientation, judgment and problem solving.

The results available so far suggest that, after 18 months, the people taking the drug saw their CDR-SB score deteriorate 27% more slowly than those taking the placebo, an effect that began to be seen after six months. In practice, this probably means its benefits will be measured in extra months rather than years. But as anyone affected by Alzheimer's – or any progressive disease – knows, those months can be precious.

Because the trial only followed people for 18 months, it remains to be seen how patients on Lecanemab will fare long term. And we still need options for people with more advanced Alzheimer's, or with other forms of dementia.

Nevertheless, these results will bring hope to people living with dementia today. Alison Littleford, whose husband, Frank, was diagnosed with Alzheimer's disease in 2020, told us what the news meant to them.

"We don't yet know if this is a drug that will be beneficial to Frank, or if and when he would be able to be prescribed it," she said, "but it is so important to us to see that research is making progress."

Not the Full Data

The results announced today come directly from the drug's manufacturer, Eisai, and haven't yet been subject to full scientific scrutiny by peer review. More data will be revealed at a large US conference later this year, and will reveal more about important things like side effects. Eisai says they will also be made available in a peer-reviewed scientific journal.

We'll be keeping a keen eye out for this information.

Side Effects and Treatment Frequency

One thing we learned from today's announcement is that Lecanemab's side effects are, like other similar drugs, quite tough for some. The main downside is a condition called ARIA (short for "amyloid-related imaging abnormalities"), which results in swelling and/or bleeding in the brain. Just over one in five patients (21.3%) who took the drug experienced this, including 17% who had a form called ARIA-H, which can be very serious. It's important to note, though, that nearly one in ten patients (9%) who received the placebo also experienced ARIA.

On top of unpleasant side effects, the drug was tested as a bi-weekly intravenous infusion. In practice, if approved at this dose schedule, it could mean regular, ongoing trips to hospital for treatment every two weeks, along with regular monitoring scans. Many people might find this tough.

Eisai is working on a version of Lecanemab that's given as a subcutaneous injection, rather than as an IV drip, which may reduce side effects and be easier and less complex to administer.

Getting It to the People Who Need It

And then there's the matter of the practical and regulatory hurdles that any new treatment must clear. As our Director of Research, Dr. Susan Kohlhaas, highlighted to the media this morning, before a drug is made available, regulators in different parts of the world, including the UK, will still need to assess the full data.

"They need to look at the data and determine whether Lecanemab is safe and effective enough to be used in people with Alzheimer's," she said.

Assuming they do – and this seems likely – it is essential that it gets to the people who may benefit from it as quickly as possible. "Now is the time to be making sure that our health system is set up to deliver life-changing treatments," Susan said.

Given the side effects, there will need to be scans and clinical monitoring in place – that will all need to be factored in on top of the simple cost of the drug. Bodies like NICE (National Institute for Health and Care Excellence), which judges the value for money of particular drugs so the NHS can make decisions about which treatments to fund, will need to carefully consider the right approach to assessing new drugs for dementia – especially given that so much of the societal cost of dementia falls outside the NHS (National Health Service) for social care, which NICE doesn't usually consider.

In preparation for all this, it's vital that the government's recently announced Dementia Mission focuses on ensuring the NHS is ready to roll out new licenced therapies as quickly as possible – for example, our report shows that, right now, only one in three psychiatry services would be ready to deliver a new treatment within a year.

These caveats aside, today's news is a profound step forward. For the research community, it marks the day that the idea of targeting the biological processes, well-accepted in field like cancer and cardiology, has finally been proven in dementia. Beyond Lecanemab, there are more than 140 experimental drugs in clinical testing today, with the vast majority targeting other processes involved in dementia.

But most of all, today's news offers hope to people with dementia. As Alison says, "For Frank and me, and all people in our situation, we need to see all avenues being explored to find successful treatments and then get them to the people who so desperately need them.

"It has been so difficult to see a once articulate, confident, outgoing and sociable man become afraid, confused, embarrassed and dependent on me in such a short period of time," she continued. "But it is a great comfort to us, as it will be for so many families affected by Alzheimer's, that there is hope that new treatments are on the horizon."

At Alzheimer's Research UK, we will keep working to bring about more breakthroughs for people with all forms of dementia, including those in the later stages of disease. And we hope today's news will spark renewed investment in dementia research across the globe and political leadership to deliver the funding and infrastructure needed to make life-changing new treatments a reality.