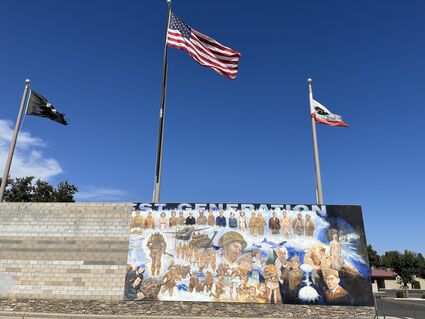 The panels on the left half of the World War II Greatest Generation Mural have fallen from their mounts and need to be restored, repaired and remounted.

The World War II Greatest Generation Mural has been a landmark in the City of Visalia since its dedication on Veterans Day 2006. Unfortunately, time and weather have not been friendly, leaving the mural in bad shape. Many of the panels that the art is displayed on have fallen from their mounts and need to be restored, repaired and remounted.

The Visalia Veterans Committee, comprised of veterans groups including American Legion Posts 18 and 785, AmVets Post 22, and Veterans of Foreign Wars Post 1864, has formed the Visalia Veterans Mural Restoration Foundation, Inc., and is asking for the public's help to repair this city landmark.

"We need to raise around $70,000 to complete the project," the foundation reports on their GoFundMe.com page. "This includes repairing damages, a full repainting, sealing the artwork properly, and remounting with stronger equipment."

"The Visalia Veterans Committee has been the caretaker of this and two other murals in the city and has worked hard to maintain them," explains Leon Lucas, the committee's chairman, "but it has become more than we can support due to the recent COVID pandemic for the past two years that prevented us from doing any fundraising."

The World War II Greatest Generation Mural is on the east side of South Mooney Boulevard near Mooney Grove Park. It is on a tall wall with the American, California and POW/MIA flags flying above it.

Currently, the GoFundMe page is for personal donations. For those wishing to donate with a tax write-off option, the 501c3 is in progress with the IRS.

"We will correspond with those interested when the IRS approval is finalized," states the foundation on the Go Fund Me page.