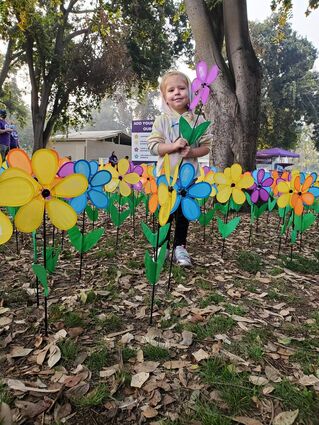 The effort to end Alzheimer's involves people of all ages.

Tulare and Kings County residents are invited to participate in the Alzheimer's Association's Walk to End Alzheimer's on Saturday, October 1, at Mooney Grove Park in Visalia.

On walk day, participants will honor those affected by Alzheimer's with the poignant Promise Garden ceremony - a mission-focused experience that signifies solidarity in the fight against the disease.

Registration for the Walk to End Alzheimer's (for those who don't register online) begins at 8 a.m. A 15-minute ceremony is scheduled to begin at 9 a.m.

Last year's walk at Mooney Grove Park, the first since 2019, exceeded expectations in both participation and money raised, but expectations for the first post-pandemic walk were low. The 2021 goal was $25,000 and $33,519 was raised.

"I think people were just ready to get out there in person," said Sherrie Wallace, event chair.

"We are almost one-third of the way there," reported Amanda Valenzuela, development manager of the Alzheimer's Association's California Southland Chapter, explaining that the website has been open for donations since January.

"Some of our teams plan events all year long," she added. It's a year-long campaign and some people get an early start."

Valenzuela was asked why she participates in the walk.

"I started walking in 2008 after losing my grandmother to the disease," she responded, adding that she has lost seven family members to Alzheimer's. "I don't want my kids to have to care for me the way I had to care for my grandmother."

"I have also been personally affected by the disease," said Wallace. "My great-grandmother passed away from the disease and my grandmother is now starting to show signs of it." 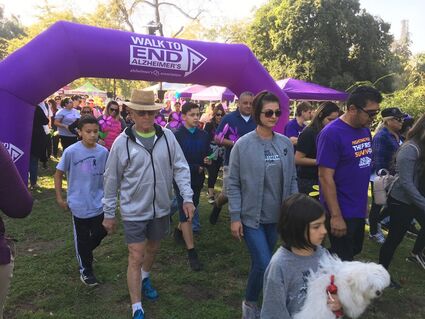 More than six million Americans are living with Alzheimer's disease, the only disease among the top 10 with causes that cannot be cured, prevented or even slowed. One in three seniors are currently expected to die from Alzheimer's or another dementia.

The Alzheimer's Association Walk to End Alzheimer's is the world's largest event to raise awareness and funds for Alzheimer's care, support and research.

People are encouraged to sign up as a team captain or team member, or to register to walk as an individual at alz.org/walk. People still concerned about COVID can again participate by walking around their own neighborhoods.

There are also volunteer opportunities, including setting up and taking down booths for walk day, working in the booths, helping with registration and educating the community about the disease and the walk at events and club meetings.