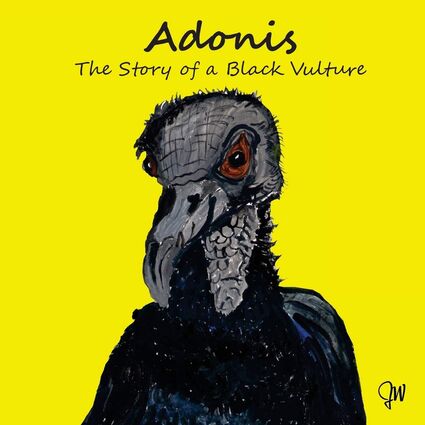 Jayne Lakhani did the artwork for this book about Adonis.

Jayne Lakhani is a 66-year-old waitress at The Pancake Shop in Hot Springs, Arkansas.

Adonis is a vulture.

Lakhani was injured in a car accident. Adonis suffered an unknown injury that affected his ability to fly.

Their 12-year relationship is the subject of the documentary "Broken Wings," which was featured on PBS as part of its Reel South series.

The 56-minute documentary can be seen at http://www.pbs.org/video/broken-wings-dfvjhe.

Filmmaker Jonathan Sutak was in Hot Springs to attend a recent film festival that included his entry, "Dons of Disco." He happened to visit The Pancake Shop, where he learned about Adonis. Sutak decided that the vulture and Lakhani should be the subjects of a documentary – one that was "more than just a little short (film)."

"I was inspired to make the film when I met Jayne," he said. "Jayne was my waitress and we struck up a relationship, a rapport. She introduced me to the vulture.

"As a filmmaker, I look for stories that will connect with an audience and connect with me," he continued. "I was surprised by the depth of the story."

The Beginning of a Beautiful Friendship

"People said he's been there for a couple years," she said, adding that she went to meet him and soon he was joining the stray cats she fed at mealtimes.

Lakhani estimates that she currently spends five to ten minutes of a day with Adonis, "depending on whether the cab is waiting for me." She also estimates that over the past 12 years, "I've spent over $48,000 on that bird. I take Uber or a cab to the store and it costs $28 just to do that."

And sometimes she has to feed more vultures than just Adonis.

"He got lucky a few years ago, but she ditched him when she found out he couldn't fly," said Lakhani, adding that Adonis takes care of their offspring. "He sat on those eggs."

She added that even though vultures mate for life, Adonis "doesn't like that female."

For awhile, Lakhani took care of Einstein, one of Adonis' offspring, feeding him all night long.

"We took him to a wildlife sanctuary and I painted his toenails blue," she said, explaining it was to identify him because "vultures look identical."

Unfortunately, she added that somebody set out a trap and he lost three toes.

Occasionally, Lakhani will have to feed Adonis' parents.

"His parents found out how good the food was," she said.

Adonis was recently interviewed over the phone by a woman known as a "bird whisperer."

"He stopped eating when she interviewed him and jumped in my lap," said Lakhani. "She told me, 'That bird really loves you.'"

Ann, Beer, the Racetrack and the IRS

Lakhani also takes care of a older woman named Ann, "who has been on my couch forever.

"I met her at a bus stop in 2007 when she had no place to go," said Lakhani. "The people who she lived with moved. She's from the U.K. and Australia. She's lived all over the world. She even lived in Africa."

Things aren't always good between them.

"I drink beer and she doesn't like that fact," said Lakhani. "She's not neat and her room is full of clutter."

In addition to beer, Lakhani enjoys going to the local racetrack four days a week. She says that she does better at simulcast (broadcasted) races than at the track because, "If you yell for the wrong horse (at the track), people get mad – and they are customers who come in and eat."

During our phone conversation, Lakhani was very open about everything, including her problems with the IRS.

"I made too much and don't take out enough money," she said. "I just got behind.

"I can't use Ann as a dependent because she's not related to me, and I can't use Adonis because he's a protected bird and they think he should be euthanized. A woman came up a couple years ago who tried to catch him, but I know the federal judge here. (The judge) said he's not bothering anybody and he's happy."

Volunteering at a Senior Home

Lakhani was a volunteer at a local senior home for about three years. One day, she decided to have the residents with dementia write and draw something in their life that had changed as a result of their illness. The goal was to enlighten kids, according to Lakhani. 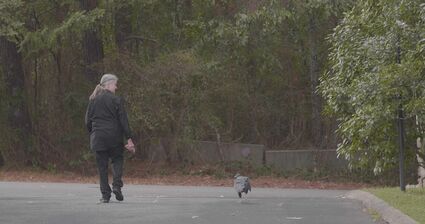 "Kids don't understand some things that go on with their grandparents," she said.

One drew having to give up car keys, another was affected by losing a pet, another drew diapers.

"One lady drew her dining room table with a place set for her husband," said Lakhani.

Lakhani has several ideas for books, but explains that "I've got to be in a certain mood." Her book ideas include a coloring book for The Pancake Shop, and a book about funny things that happen in trailer parks.

A book she did with author Wendy Jones, Adonis: The Story of a Black Vulture, was published in 2016 and still available on Amazon. Her part of the book, which was mainly creating the artwork, took her two days.

"I gave her 30 pictures and she chose which ones to use," she said.