Most Local Senior Centers Back in Business 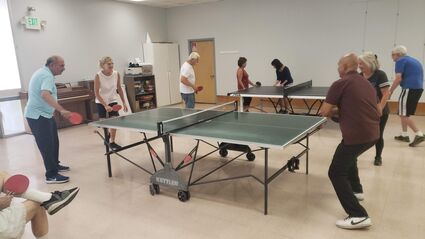 Those who came to count on the multitude of senior centers throughout Tulare and Kings counties for meals and socialization are seeing those pandemic-shuttered programs return to their previous popularity.

There are more than a dozen senior centers in Tulare County, and most of those located in larger cities have been opened in one capacity or another for several months or longer. In Visalia, enrichment classes have begun once again at the Visalia Senior Center, where City of Visalia Recreation Supervisor Holly Ellis said there are six offerings during the week, including a few new classes like beginning drawing, studio ceramics and beginning watercolor.

"We actually did a soft opening in August last year for dine-in lunches," said Ellis, adding that as of now there are no mask, proof of vaccination or social distancing requirements.

"Of course, (seniors) can wear a mask if they'd prefer and can ask to sit somewhere with more distance," she said. "We just want them to be comfortable."

Ellis added that the Visalia Senior Center didn't reopen until given the approval of the city's safety officer who is responsible for such decisions.

"Seniors were very excited to have the center open," she said. "We really wanted them to feel comfortable, which is why we ran the lunch program through COVID. At least they had some connection to the outside world."

The lunch program previous to the reopening was limited to drive-through pickup of lunches, which has now ended. To-go lunches are still available for pickup, however.

"At this point, we are willing to bring back all the programming. but instructors are not available to offer it," she said, adding that due to COVID, several are no longer available, having found new jobs. So the search for new instructors and programming is taking place.

Meanwhile, in Kings County the Hanford Parks and Recreation Department has been offering classes for seniors "pretty much since last summer," said Armando Da Silva, recreation supervisor for the City of Hanford. "We are back to the numbers (of participants) we had before and have actually increased our numbers."

Seniors there enjoy water aerobics, senior aerobics and Zumba classes, while the Seniors Inc. organization has been holding bingo at the veterans building a few times per week.

The Lemoore Senior Center claims the prize as the most resilient, according to those interviewed for this story.

"We were only closed for about two weeks when (the pandemic) struck," said a representative.

While social distancing and masks became a part of the bingo games played multiple times per week, those requirements have since been relaxed.

"Things are pretty much back to normal," she said.

At the Tulare Senior Center, drive-through lunches are still being offered instead of a dine-in option, but programming such as arts and crafts has begun to return. Bingo is offered during the week now, and classes are beginning to be added.

The Dinuba Senior Center is also seeing activity pick up after reopening in June last year.

"It was low attendance at first but it built back up to what it was before," said Cece Bobst, senior center coordinator for the City of Dinuba. She said they are serving 130 lunches on days when meals are offered, and in July, participants will see the resumption of bus trips, with an excursion to Avila Beach scheduled for July 20. 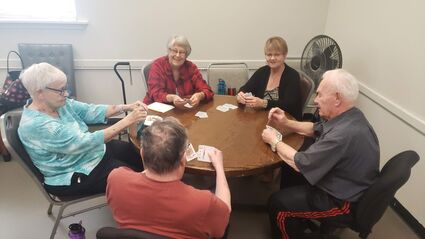 Pinochle and bridge are popular card games at the Visalia Senior Center.

But for those who attend centers in Porterville, Lindsay, Exeter, Woodlake, Earlimart, Goshen, Orosi and Farmersville, the situation is more bleak. None of the eight centers managed by Community Service Employment Training (CSET) have reopened. According to the CSET website, centers have been closed since March 2020, and seniors were automatically enrolled in a meal delivery program.

"I've been asking every day when we are going to reopen and have yet to get an answer," said a manager at one of the eight centers.

"It's a shame for those seniors," said Julie Burger while playing cards at the Visalia Center, regarding the eight shuttered senior centers. "Seniors need it more than anything, the support and friendship."