Cemetery Measure Heading Back to Ballot in November 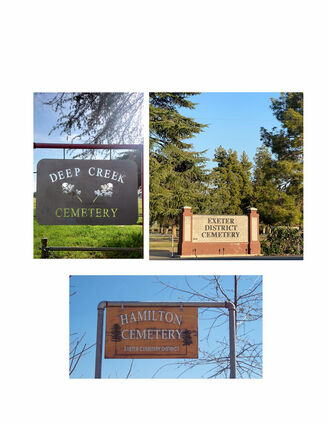 The three cemeteries that comprise the Exeter Cemetery District.

Measure U, which would have provided funds to the Exeter Cemetery District, received most of the votes in the June elections, but lost.

The final election summary report on the Tulare County Registrar of Voters website showed 62.15% voters supported Measure U with 37.85% voting no. Special district measures need a two-thirds majority, or 66.66% approval, to pass.

The Exeter Cemetery District Board decided at its June 9 meeting to try again in the November general election. This time, the district plans to increase its community outreach efforts by publishing more articles in local news outlets, make more presentations to service clubs, and send out more mailers.

The cemetery district reported average losses of $23,290 per year from 2017-2020. That trend has been the same for more than a decade. As of June 30, 2020, the district had only two years of cash reserves to sustain these losses.

During the fiscal year ending June 30, 2022, burial services increased by 38% as a result of the pandemic, with corresponding revenue increases, while costs remained relatively equal to prior years. This led to a greater cash reserve. However, the board's goal is to prepare for a return to the ten-year trend of declining revenues and seek a permanent cash flow solution.

If this $35-per-parcel tax does not pass, the cemeteries have an estimated five years of cash reserve to sustain the losses incurred prior to 2021. Once the district runs out of money, the state will take over the three cemeteries and use the endowment fund to maintain the cemeteries. Burial services will no longer be provided.

The Endowment Care Trust Fund was initiated in 1998 when cemeteries began to close because they no longer had burial space and as a result, no more revenue. The money was gone and many owners/districts walked away.

The endowment care funds are to provide care and maintenance once the cemetery plots are sold out and/or the location is closed. For Exeter Public Cemetery District, a $350 fee is added to the price of each service for the endowment care trust fund.

"Deep Creek Cemetery has been out of water for 11 years," said Erica Pine, Exeter Cemetry District CPA and spokesperson. "The first use of funds would be for restoring water to Deep Creek and making that location a place of pride for the community again.

"All three locations need cremation crypts and alternative memorial options," she continued. "The use of funds will be reviewed by a community oversight committee made up of two Exeter residents, two Farmersville residents and one outlying community resident. These five community leaders will have a say in how the funds are used and we look forward to hearing new ideas.

"Cemeteries are an important reflection of a community," she said. "Declining revenues and rising costs are jeopardizing this. You can make a difference and ensure the future of Deep Creek, Exeter and Hamilton cemeteries."