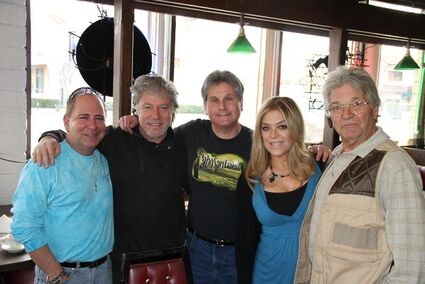 "Stu's Show" is an online show about classic television, featuring interviews with the stars and creators of the most memorable shows of the 1950s and 1960s.

Since the broadcast moved to Pine Mountain Club, a small town in the mountains between Los Angeles and Bakersfield, classic TV celebrities have had to make the drive, which includes about 15 miles of winding mountain roads each way.

Celebrities do it because of the persuasive personalities of the show's host, television historian and archivist Stu Shostak, and his wife, Jeanine Kasun.

Shostak radiates enthusiasm when he talks about the television shows he grew up with. He recalled that the worst punishment his parents could give him was talking away his televsion privileges.

"Taking TV out for a night was a big deal to me," he said. "God help my parents if I missed 'The Flintstones.'"

Meanwhile, many of the show's guests, including Ed Asner, have been swayed by Kasun's charm.

"I meet these people and they fall in love with me," said Kasun, as modestly as it is possible to say those words.

"After I'd done the show for a couple years, I had a reputation," Shostak said, about how well he treats his guests. "I always take my guests to lunch after the show."

He gives his guests time to tell their stories without rushing them through their interviews.

"Carl Reiner loved to talk about the ('Dick Van Dyke') show because he had two hours to talk about it," said Shostak, adding that he could go into detail about some of the decisions he made, including when he had to cut down what he thought was one of the funniest episodes. "You never hear people on a talk show talk about things like that. They're not going to do it on 'The Tonight Show.'"

Usually, "Stu's Show" is not rehearsed.

"If there's a troubled part of their life, I'll ask them (before the show) if they want to talk about it," he said. "Bob Barker cried on my show."

Barker, who was the long-time host of "Truth or Consequences," was told in 1965 that the network had decided to end the show. Barker said his goodbyes during the last few minutes of what he thought would be his final show. He hadn't seen that episode in 50 years when Shostak played it for him.

"He teared up when I played it," Shostak recalled. "He said, 'I thought my career was over.'"

Fortunately for Barker, as well as for "Truth or Consequences" fans, the show became the first game show to go into syndication on stations across the county.

The Inside Scoop about the Stars of Classic TV

Shostak described Stan and Barry Livingston from "My Three Sons" as "down-to-earth. The fame really didn't hurt them."

He compared the Livingston brothers to the children on "Different Strokes" who "had too much money and too much fame. They didn't handle it very well.

"Gary Coleman was a victim of his manager and his parents," he said. "Gary didn't see much of the money (from 'Different Strokes'). He did not die very wealthy."

For more than 50 years, Shostak has been Lucille Ball's archivist, a job he is also doing for Dick Van Dyke.

He described Ball, whom he considered a good friend, as "one of the most talented people to ever come into show business. She was smart, she knew show business, she was motherly and she had a heart of gold."

Shostak knows a lot of the stories about the stars of classic TV, such as the time that Lucille Ball stood up for "Mission Impossible," a program that CBC had turned down.

"She had faith in 'Mission Impossible' and told CBS, 'If you don't pick this show up, I'm not going to do my show."

Shostak is not likely to write a tell-all book about the stars of 1950s and 1960s television.

"People have asked me to write about my life, but some things are sacred," he explained, prefering to let the interviews he conducts stand by themselves. "There's nothing like hearing it in their own words.

"I have too much respect for these people," he added.

Described as "a Hollywood love story about finding your leading lady... and the fight to keep her alive, the newly released "Stu's Story" documentary tells Shostak's story from his days handing out tickets to Norman Lear show tapings, to doing audience warm-ups for shows such as "All In The Family" and "One Day at a Time." His relationship with Ball is also in the film.

At a "Loving Lucy" convention, Shostak met Kasun, a Lucy superfan, and they soon shared long phone calls and started dating. All seemed to be well before Kasun suffered a brain aneurysm, which threw the two of them into a battle with the medical industry to keep her alive. 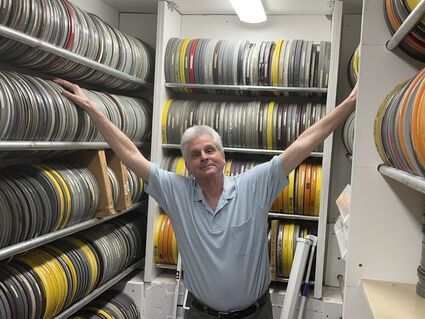 Shostak in his film archives.

"She comes along and loves everything I love," Shostak said. "Now you're going to take away the one thing I waited my whole life for?"

The story of how a love of classic television brought Shostak and Kasun together – and their fight with the health industry – inspired documentary maker C.J. Wallis to tell Shostak, "This is my next documentary. People need to know."

"He said, 'You're kind of a quirky guy and you collect old TV. It's a wonder that you don't live in your mother's basement.'"

Episodes of "Stu's Show" can be seen online at http://www.stusshow.com, along with information about the show.

The "Stu's Show" documentary can be seen on various streaming and pay-per-view services. It is available for sale on Apple iTunes, Amazon Video and YouTube.