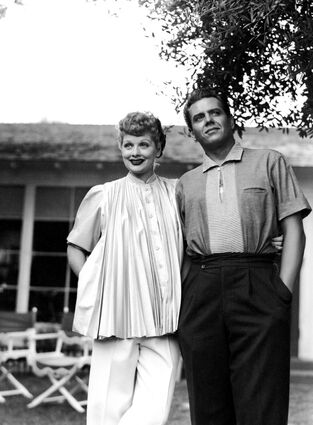 Lucy and Desi were preparing to have a family in this photograph.

Just days after Desi Arnaz passed away in December of 1986, Lucille Ball was honored at The Kennedy Center Honors. He had written a letter for her, special for the occasion, to be read aloud during the ceremony for all to hear.

The final line was, "'I Love Lucy' was never just a title."

"Lucy and Desi" is the documentary debut of filmmaker, actress and comedian Amy Poehler, exploring the real-life world of the performers behind America's most famous TV couple, Lucy and Ricky Ricardo.

Despite coming from very different backgrounds, Lucille Ball and Desi Arnaz somehow found in each other a unique once-in-a-lifetime connection, off which they built not only one of the most popular series in television history, but a Hollywood empire that invented and inspired many of the common production practices still used in today's global entertainment industry.

Lucy spent her childhood in Jamestown, NY, raised by an authoritative mother and her loving grandfather. She left for New York as a teenager in 1928. First, she became a model, and eventually she made her way to Hollywood to become a Goldwyn Girl, and then onwards to years of work at RKO, becoming known as "The Queen of B Pictures," for her roles in many smaller scale movies.

Desi was raised in wealth and privilege in Santiago de Cuba, his father the mayor, with intentions of his son becoming a lawyer or a doctor. But with the Cuban revolution in 1933, Desi's family was chased from power and jailed, and a 14-year-old Desi sent to Miami.

Having lost everything and starting from scratch, even cleaning canary cages, he soon discovered his skills as an entertainer. Through the mentorship he received by popular Latin bandleader Xavier Cugat, Desi became one of the most popular Latin artists in America at the time, famous now for introducing the Conga line to the USA.

He and Lucy met on the set of the 1940 RKO musical comedy, "Too Many Girls," and were married six months later. But through most of the 1940s, they rarely saw each other, with Desi's work with his band taking him on the road for much of the year.

It wasn't until 1948 when CBS decided to put Lucy on the radio, taking advantage of a rarely-tapped skill – her comedic talents – for a series called "My Favorite Husband." When the network decided to bring both the show and Lucy to television, the actress took one of the first of many groundbreaking steps, insisting that her Latin real-life husband play her television one, bringing the first mixed-race couple to American television.

The two, along with the writing team from Lucy's radio series, developed what became "I Love Lucy" in 1951, again breaking new ground in its production. The couple, which by then had a new family member, their daughter, Lucie, had no interest in producing the show in New York, as the network wanted, nor in sending low-quality kinescope copies of the show for broadcast on the West Coast.

So, Desi created – a first – a production system of filming the show in front of a live audience with three film cameras, in a system crafted by legendary cinematographer Karl Freund ("Metropolis," "The Mummy"), which delivered uniform quality prints for every time zone.

Desi also arranged to own those prints, which ended up allowing for what became the creation of reruns in television, along with their own solid vested interest in the show.

When their real-life family was about to grow in 1953, the duo once again insisted on breaking the mold, allowing Lucy to be seen on camera pregnant, something which had never occurred on television. The "Little Ricky" birth episode of "I Love Lucy" became one of the most seen episodes in television history.

Their own real family life blossomed during these years, as seen in "Lucy and Desi" via color home movies made available by Lucie Arnaz Luckinbill and the family estate. The footage depicts the couple's real life outside of the studio and the world of "I Love Lucy," something rarely seen before now.

Lucy and Desi formed their own studio, Desilu, to handle not only the production of their own show, but the development of others that came after – "The Untouchables" and "Star Trek," to name two. But as Desi's tasks shifted from making comedy with his wife to running a studio, the stresses that were introduced into their marriage – and the unhappiness it brought to Desi – eventually caused the couple to divorce in 1960, after the last "I Love Lucy" show was filmed.

Lucy went on to create her own series, "The Lucy Show," not long after, and in 1962, bought out Desi's share of Desilu, running the studio herself. She eventually found herself not enjoying the demanding life of being a studio executive, selling the company to Paramount in 1967. She created her last series, "Here's Lucy" in 1968, which featured both her children as her onscreen kids.

Both she and Desi found new people and remarried in the 60s, having long-term, happy marriages. Throughout this time, though, Desi remained in Lucy's life, and her in his. As they embarked on a lifelong friendship, Lucy often would call Desi to help her brainstorm on both of her later series. He would do what he always did best – ultimately, helping Lucy do what she always did best – which was to make us laugh, smile, and feel as one.

Making of 'Lucy and Desi'

It is often hard to tell the story of how something is made, yet for a documentary that goes behind-the-scenes as much as "Lucy and Desi" does, the "making-of" in this film's case is straightforward. It began with a team of talented producers finding the right director.

Producers Michael Rosenberg and Justin Wilkes of Imagine Entertainment, Jeanne Elfant Festa and Nigel Sinclair of White Horse Pictures, all had Amy Poehler on their minds when it came to who would be the best person to tell this story.

"I had seen her films, I knew she was directing, but I didn't know if she wanted to do a documentary," says Festa. "She was in our living rooms – we all felt like we knew her character, Leslie Knope, from 'Parks & Recreation' – just like we feel like we know Lucille Ball, from 'I Love Lucy.' But both are, of course, completely different people from their characters."

Poehler's earliest memories, as a child, of "I Love Lucy" are of countless chuckles coming from her family's living room, hearing her parents' laughter as they watched the show.

"'I Love Lucy' and television were almost fused," she states. "It was as if that show came with every television." But it was not until she was deep in her own career that she truly connected with it – and with its stars. "It wasn't until I got older, and doing comedy myself, that I really understood what they were doing, and was able to see the many layers to their genius. I'm inspired by the big swings that the two of them took. They came to their success with a lot of confidence. And, because of that, they said 'No' to a lot of things. They took giant leaps. They left their homes and worked really hard, and just kept gambling. And they didn't play small. They were very, very brave.

"The way in to a lot of stories, for most people, is a love story," Poehler explains, "It's really universal. I knew I wanted to touch on important themes – the different ways they approached work, what kind of work comedy is, and what they did as pioneers for television. But we succeed and fail based on how much we care about their love story."

Poehler was also keen to tell the story of how Ball and Arnaz completely turned the television world upside down, Sinclair notes. "Amy came to this with a very strong point of view about who Lucille Ball was – an insurgent or a disruptor of the business. They shot in L.A., they shot it on film, they used three cameras, they cast a man of color in the leading role for a national sitcom. This isn't just a story of 'funny' – it's a story of disrupting the TV business, and of a relationship that breaks and makes."

Another key part of their story for Poehler quickly became evident. "One of the themes that I grasped onto very early on was the idea of 'rupture and repair.' Which is something that comedy can do really well. It's what people turn to when their own lives are chaotic. And 'I Love Lucy' was one of the early adopters of that genre: you have a problem, let everything unravel, but, don't worry, it's gonna be okay." 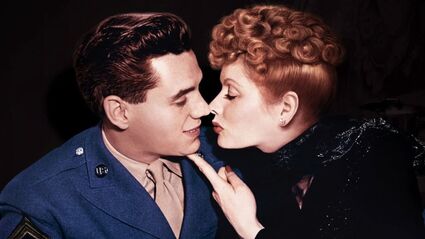 Lucy and Desi had a love that survived the stresses of building a television empire, Desi's affairs and even a divorce.

As Lucie Arnaz describes it, "'I Love Lucy' really was about unconditional love and forgiveness. Somebody screws up really bad, and at the end of the 30 minutes, somebody goes, 'Oh, honey... I love you, blah blah blah.' I always say it could have been called, 'I Love Lucy Anyway!'"

"Lucy and Desi" started streaming on Prime Video in March.