Oscar Winners Featured in 'a Different Kind' of Alzheimer's Film

Karen Grassle (Grandma) and Tate Dewey (Chris) in "Not to Forget."

"From the beginning, I wanted to create a different kind of "Alzheimer's film," said Valerio Zanoli about "Not to Forget," which he wrote, produced and directed. "I was determined to make a film with the right compromise of light situations and dramatic moments. Instead of focusing on an elderly person, I decided to take the perspective of a young caregiver. So, I wrote the story of a millennial who doesn't know anything about Alzheimer's and finds himself taking care of Grandma."

Zanoli started developing "Not to Forget" in 2018, after learning about the terrifying numbers related to Alzheimer's. He noted that every 65 seconds, another brain develops Alzheimer's, and that two-thirds of them belong to women.

"My intent was clear from the very beginning – giving life to a film that could have a social impact and become a tool to raise awareness for the fight against Alzheimer's," he said. "I wanted to entertain audiences around the world while informing them about this terrible disease."

In the movie, Grandma forgets names and events, but she remembers love. Meanwhile, her grandson and caregiver Chris remembers everything – to the point he makes a "career" out of counting cards – but he forgot the value and importance of family.

Dementia affects approximately 50 million people around the world, with nearly 10 million new patients every year. This terrible disease also affects the caregivers – the unsung heroes, often family members willing to sacrifice themselves to take care of their loved ones.

"During pre-production, Alzheimer's patients and caregivers read the screenplay and provided invaluable feedback," recalled Zanoli. "After several revisions, I reached out to my dream cast and I convinced Karen Grassle, who played Caroline Ingalls (Ma) in the NBC television series 'Little House on the Prairie,' and five Oscar-winning actors to join me in Kentucky for an incredible experience. I had the honor and pleasure of working with talented professionals, of directing Cloris Leachman and Olympia Dukakis in their final performances, and of bringing to the big screen a sweet story that needs to be told."

"Working on the film 'Not to Forget' was an unforgettable experience," said Grassle. "After writer and director Valerio Zanoli approached me for the role of Melody, I read the screenplay and I immediately accepted to be part of this sweet and charming story.

"Our film dealt with dementia and was produced as an attempt to further educate and draw funds to this issue," she added. "This film reminds the audience we need to strive to make a difference and support the fight against this terrible disease, which affects millions of people and their families."

The film features Cloris Leachman, who won an Academy Award for "The Last Picture Show," and eight Primetime Emmy Awards from 22 nominations, making her the most Emmy-nominated and tied for the most Emmy-awarded actress in television history.

"Over the past few years, I have assisted my late mother on the several films she starred in," said Dinah Englund, Leachman's daughter. "From my privileged position on set, I was happy to see that Valerio was taking his time with my mom. Though her age and health didn't make it easy, Valerio was very patient, worked around her needs, and was determined to make her shine. He went so far to create a character carved from her personality. Spending time with her also off set, he made sure to listen to her voice and treasure her advice."

Olympia Dukakis, also featured in the film, won an Academy Award and a Golden Globe for her performance in "Moonstruck."

"When he approached me, Valerio wanted to create a movie to raise awareness and funds for the fight against Alzheimer's, and I wanted to be part of it," said Dukakis soon after the film was completed. "Valerio created a sweet film, which I enjoyed watching. He respected the limitations imposed by my age, and he calmly and professionally helped me feel at ease, before and during filming. I was glad that Valerio kept in touch with me for the holidays and for my birthday, kept me updated about the status of the film, and asked for my feedback."

"Not to Forget" also features Tatum O'Neal, the youngest person ever to win a competitive Academy Award, which she won at age 10 for her performance in "Paper Moon"; Louis Gossett Jr., best known for his role in the film "An Officer and a Gentleman," winning him the Academy Award for Best Supporting Actor; and George Chakiris, who won both the Academy Award and the Golden Globe Award for his performance in the 1961 film version of "West Side Story."

"When I first got the audition for 'Not to Forget' and I had the chance to read the script, I knew right away that not only was it a great opportunity to work on a great film, but it was something I could really grasp onto and connect with," said Tate Dewey, who plays the role of grandson Chris. "The film deals with one of the most destructive diseases in the world, but it focuses less on the specifics of the disease itself and more on how families can come together in the midst of it. 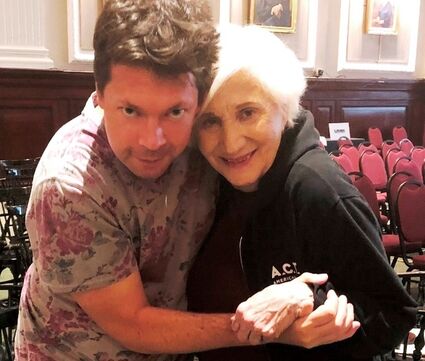 "One of the main themes is growing up, as Chris does in the film," he added. "That journey and the challenges that came with it were very interesting. I couldn't have dreamed of a better character to portray in my first lead role, and at the same time I was well aware of the amount of work and commitment I'd have to put into it. In that sense, both Chris and I got to grow up, and I'd say the experience really helped me not only as an actor, but also as a person."

"Not to Forget" is part of a bigger project, Let's Make a Difference (www.letsmakeadifference.info), which Zanoli created to raise awareness and funds for childhood cancer, childhood obesity, bullying, Alzheimer's and homelessness.

"I believe filmmaking could – and should – be used to make a difference," Zanoli explained.

"Not to Forget" is currently available to rent on such streaming services as Amazon, AppleTV and DirecTV, and for sale on websites including Amazon, RedBox and AppleTV.