Seniors Remember the Old Days in 'One All the Way' 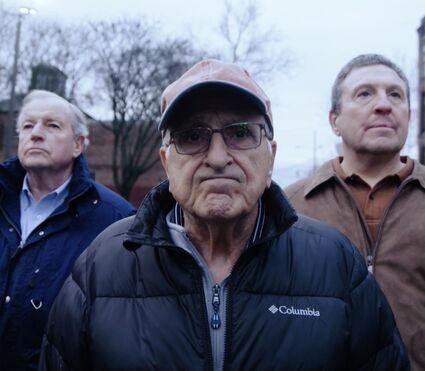 Ron Rauschart, Harry Baram and Larry Presta are shown on a hot dog crawl in "One All the Way."

For years, Harry Baram, Ron Rauschart and Larry Presta have spent many evenings out on "hot dog crawls" in the Paterson, New Jersey area. They have hot dogs at a few restaurants where they discuss their meals and share memories about the good old days. Their stories, as told in the documentary film "One All the Way," also reflect the history of Paterson.

The film's director, David Baram, Harry's son, enjoyed working with his father, although he did not expect that his father would play such an important role in "One All the Way."

"When I originally outlined (the film), it was less about Harry's story and much more about the grill culture," he said, "but I go where the cameras and characters and production take me.

In the film, Harry Baram talks about his experiences at various hot dog grills in the Paterson area. He even proposed to his wife in the booth at one of those eateries.

"I think (the film) humanizes him even more than I realized," said David Baram about his father, noting the scene where he walks by a ballpark and says, "This is where I played baseball when I was a young man."

"As we point out, Paterson is still the second most densely populated city in the country," said Baram. "Outside of New York City, it was the number one destination for immigrant labor in the U.S. in the 19th and early part of the 20th century. There was a Polish section, a Greek section, a Black section."

He added that since then, immigrants from Asia, Africa and the Middle East have settled in Paterson.

"It's always been, throughout its history, that it had these pockets of ethnicity," he said.

The hot Texas weiner was invented (or at least named) by John Petrellis, a Greek immigrant living in Texas. He moved to Paterson and opened a hot dog stand in the Paterson Hotel in 1924.

The film shows a diagram of how the staff at The Original became "the ultimate feeding ground" for Texas weiner entrepreneurs in Northern New Jersey.

But the popularity of the hot Texas weiner never extended beyond a small area in New Jersey.

"The only place we've been able to find (hot Texas weiners) is in Paterson," said Baram. "You can go to other parts of New Jersey and they have no idea what I'm talking about."

He estimated that the popularity of hot Texas weiners is mainly confined to a 10-mile radius around Paterson.

What Makes a Hot Texas Weiner?

A hot Texas weiner has to be deep fried. The hot dogs used have to be specially prepared because a regular hot dog will eventually disintegrate in a deep fryer.

"There are three or four companies that make these hot dogs, and each has their special taste," said Baram. "Some are more spicy, and some are more tangy."

Grill owners all add their secret recipes to their hot Texas weiners.

"Each grill owner treats their recipe like it is the CocaCola formula," said Baram. "They keep it locked up."

Baram wouldn't say which restaurant served the best hot Texas weiner, but "the Hot Grill and Giffle Grill have always been my favorites."

"One All the Way" was filmed "literally weeks before the pandemic," according to Baram.

"Actually, I hoped to get more (filming done), but we had enough to go into post-production, research and editing," he said.

"One All the Way" was finished in 2020 and was screened at various film festivals in 2021 where it received seven film awards. Baram was asked about possible Academy Award consideration.

"We've been approached, but I said that's a super-longshot," he responded. "Certainly, none of us are holding our breath about that."

There was also a special screening in Patterson, which was attended by a pioneer in the Paterson hot dog industry.

Chris Betts, 98, who along with his brothers co-founded the Falls View Grill in 1949, was living in an assisted living facility when the movie was shown in Paterson.

"He was central to not only the industry but to Paterson," said Baram, who arranged for Betts to attend the screening. "The first time he saw the film, it was a sold-out house. He probably (posed for) 500 pictures."

Despite the nostalgic tone of the film, there are scenes in "One All the Way" that suggest the tradition of hot Texas weiners will continue, at least for another generation. Near the end of film, a group of young people are shown in one of the restaurants.

More importantly perhaps is the scene with Maria and Cristina LaMendola. When their father, Carmen, who owned and operated The Hot Grill for 57 years, passed away, they continued family tradition and took over the business, which surprised some of their employees who had expected that Carmen's passing meant they needed to find other jobs. 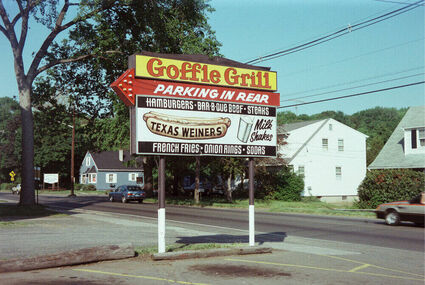 The Goffle Grill is one of the film director's favorite restaurants.

Those who don't attend film festivals should be able to see "One All the Way" soon, according to Baram.

"My hope is – when we come to the end of the festival cycle – that it will be available on one of the streamers – Netflix, Amazon – very shortly," he said. "One way or another – maybe on YouTube."

Baram took time from his busy schedule to talk to us about "One All the Way." In addition to the film festivals on his calendar, he is currently filming "Ball and Vase," a movie starring Austin Pendleton about a senior who is a magician. The title refers to a particular magic trick. Shooting was scheduled to start last month.