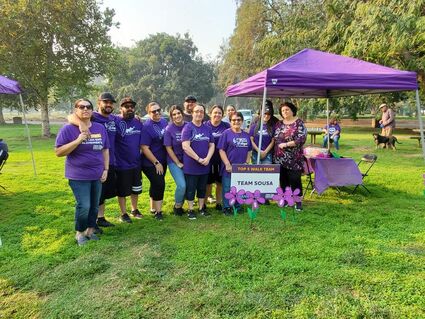 The top fundraising team at this year's event was Team Sousa, which raised $4,400 to fight Alzheimer's.

More than 200 area residents helped exceed the fundraising goal of this year's Tulare & Kings Walk to End Alzheimer's, which returned to Mooney Grove Park in Visalia on October 2nd.

Due to the COVID-19 pandemic, participants in last year's event walked as individuals or in small groups in neighborhoods and trails throughout the area.

"It was so great to be back in person, and to see everyone in their purple Walk gear," said Sherrie Wallace, event chair. "I was in amazement, because our community went above and beyond in fundraising this year. Our goal was $25,000, and as of today (October 9), we have raised $33,253! I am so proud our community. Our community's passion and participation in Walk to End Alzheimer's fuels the care, support and research efforts of the Alzheimer's Association."

"It was well-attended, more so than we expected," echoed Amanda Valenzuela, development manager of the Alzheimer's Association's California Southland Chapter.

"I think that it's been a difficult couple of years so I didn't know what to expect," said Valenzuela, who noted the lingering pandemic as well as the effects on the local air quality from the mountain fires. "I was pleasantly surprised by the participation. The attendance was much higher than the national average." 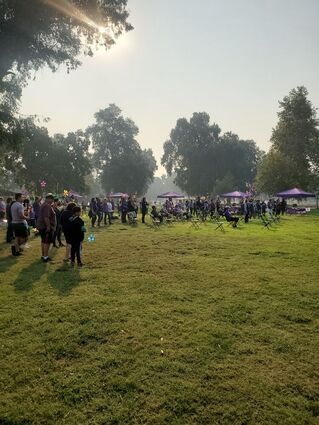 Participants gather at Mooney Grove Park in Visalia for the 2021 Walk to End Alzheimer's.

Internationally, the Walk to End Alzheimer's is the world's largest event to raise awareness and funds for Alzheimer's care, support and research.

More than six million Americans are living with Alzheimer's disease, the only disease among the top 10 with causes that cannot be cured, prevented or even slowed. One in three seniors are currently expected to die from Alzheimer's or another dementia.

Additionally, more than 11 million family and friends provide unpaid care to people with Alzheimer's and other dementias in the U.S.

Donations for this year's Tulare-Kings Walk to End Alzheimer's can be made to: The Alzheimer's Association, 1401 Commercial Way, Suite 210, Bakersfield, CA 93309. Donations received by December 31 will be credited to th 2021 Walk.